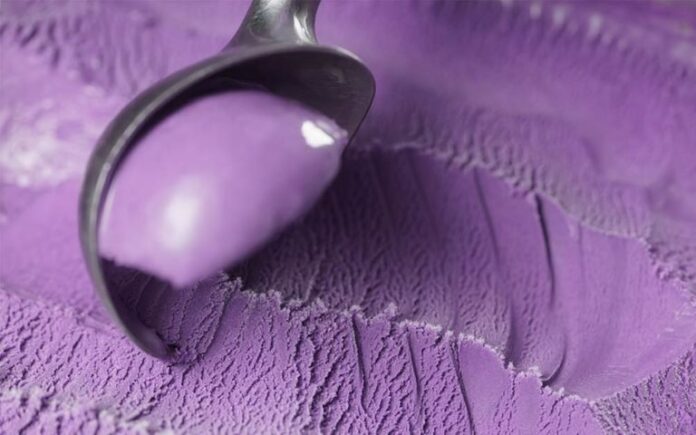 Ever wonder why you can find grape ice pops, but not grape ice cream?

When you think about common fruit flavors, grape is probably one of the first to come to mind. But as common as it is in candy and Popsicles, it’s nowhere to be found in ice cream. Weird, right? If you’ve ever wondered: Why can’t you find grape ice cream? Well, it’s a grape question! (There are more ice cream puns where that came from.) Luckily, there are legitimate reasons for it—and it’s not one of those mysterious secrets ice cream truck workers won’t tell you.

Why is grape ice cream hard to find?

There are actually a couple of legitimate reason people rarely sell grape ice cream—none of which has to do with the bizarre rumor that the FDA banned it for making dogs sick. The first has to do with the fruit’s color! “Grapes contain a compound called anthocyanin—it’s the source of the purple pigment,” says Jim Mumford, food professional, cookbook author and chemical engineer. “This compound, while a powerful antioxidant, can change how the grape puree freezes. The compound actually breaks down, which affects the color and the flavor to an extent. This is why most grape flavored desserts have food dyes.”

The acidic nature of grapes makes them tough to “ice cream-ify” as well, Mumford adds. “The acid [in grapes], when mixed with dairy, will cause some chemical reactions (aka spoilage),” he says. “So the acid must be processed out of the grape juice before blending, which, while achievable, is another step other flavors don’t have to take.” Don’t miss these 20 other food facts that will change how you eat.

Grapes have high water content, which is why eating them is an easy way to stay hydrated. But it also means that when you freeze them to make ice cream, they’ll turn into icy chunks. That’s all fine and dandy for an ice pop recipe, but not what anyone wants from a scoop of smooth ice cream. “The creamy ice cream is difficult to produce in large quantities,” explains Ja-ne de Abreu, author of Sassy Food. “The texture would be off and not so creamy.” Plus, leaving the skins on would ruin the texture, but peeling grapes takes away most of their flavor.

“There are small artisan ice cream shops that make grape ice cream or sorbet,” de Abreu says. “Homemade grape ice cream is also possible.” She cuts up chunks of grapes in her batch of vanilla or lavender ice cream and finds it to be a wonderfully yummy treat. “If I want to blend the grapes in the ice cream, I make the base with more cream than I would with other flavors, and there ya go,” she adds. It’s going large-scale for a mass market that gets tricky.

We know what you’re thinking: Cherry Garcia is one of the most popular flavors ever from Ben & Jerry’s. Grapes and cherries are both about 81 percent water. Wouldn’t those ice-cold cherries pose the same problem as grapes?

The short answer is yes. But the fact that people go crazy for cherry means it’s worth the effort, while grape doesn’t have nearly as strong an association with ice cream. If big-name brands did make grape ice cream—even using grape flavor instead of the fruit itself, like in some sherbets—they probably wouldn’t sell enough pints to make it worthwhile. These are the differences between ice cream, sherbet, sorbet, and gelato.

In fact, Ben & Jerry’s actually did try to make grape ice cream once. But it got mixed reviews from taste-testing guests at the company’s Flavor Lab, so the brand never bothered moving forward with it. Maybe someone should tell that to the people obsessed with these 18 weird food combinations.