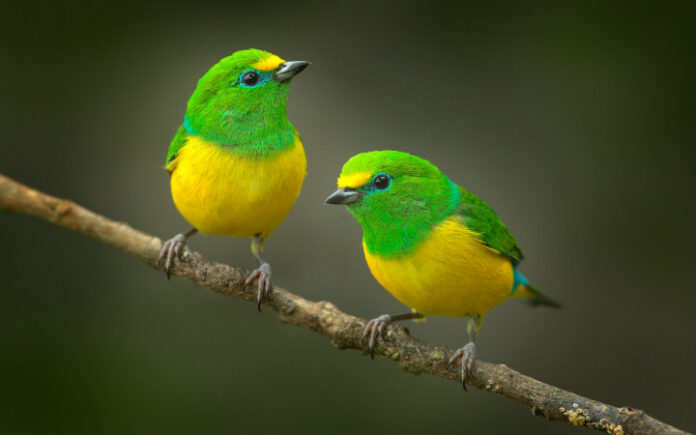 Picture it: You’ve just woken up after a great night of sleep. The sun is rising, and you hear the sound of a bird singing outside. Soon, it’s joined by another bird. Before long, a whole chorus is singing from the limbs and power lines. What a way to wake up!

What we’ve just described is known as the dawn chorus—a natural concert of birdsong that often starts before the sun rises. Who sings in this chorus? Any songbird in any location might join in. Isn’t that lucky for us? We can hear the dawn chorus just about anywhere birds are present if we know when to listen.

Are you WONDERing what causes the dawn chorus? Many of our Wonder Friends are already familiar with the concept of mating calls. The dawn chorus is similar. Often, birds join in the singing in search of a mate.

Like many other animals, birds can tell a lot about each other based on how they sound. A bird can learn about the health and fitness of a potential mate from their song. Most often, it’s male birds who join the dawn chorus. Singing early in the morning shows nearby females that they were strong enough to survive the night.

Singing in the morning also has other benefits for members of the dawn chorus. Sound often travels farther in the early hours thanks to lower temperatures. There’s also likely to be less noise from other animals at dawn. This means the birds’ songs can be heard from a greater distance, increasing their chance of finding a mate.

Birds may also sing in the morning to mark their territory. During the dawn chorus, they may warn nearby birds to stay away from their nests. It’s also a time when baby birds learn to sing like their parents.

How do birds learn to sing? It depends on the species. Songbirds learn by listening to their parents and neighbors. However, researchers have found that some suboscine birds seem biologically wired to sing their song. They don’t need to learn from others—even when separated from their species, these birds start to sing the same song as their ancestors.

Prefer to sleep in? Don’t worry, you don’t have to be a morning person to hear beautiful birdsong! Often, they’ll put on an encore performance at dusk. This is especially common in the spring season, when many birds are searching for mates.

Do you ever listen to the dawn chorus? Bird lovers everywhere say it’s worth waking up early! The next time you’re up at dawn, listen closely and see if you can recognize the sounds of any familiar birds.