Although it is often said that the war began when France and Britain declared war on Germany as a result of its invasion of Poland, the causes that led to the war are more intricate. There were a variety of factors leading up to the Second World War which can be divided into short-term causes and long-term causes.

Reparations on Germany from the Treaty of Versailles

After the First World War ended in 1918, there was a general sentiment that Germany should be held responsible for their involvement in World War 1 and that limitations should be imposed on them so that they cannot seek war again. Major world leaders, including Woodrow Wilson from the United States, Vittorio Emanuele Orlando from Italy, Georges Clemenceau from France, and Lloyd George From England, gathered together to determine the ways in which Germany should be punished. Since France wanted revenge on Germany, the Treaty of Versailles was made in favor of Georges Clemenceau and was not based on Woodrow’s 14-point plan which was deemed to bring peace to the region of Europe.

The treaty of Versailles called for Germany to give back the French territories that they had claimed during the Franco-Prussian War. Germany was also asked to pay an astronomically large sum of money. Some experts, including John Maynard Keynes warned that they thought the Treaty of Versailles to be too harsh. They warned that such fees would cripple the economy of Germany as the country could not afford to pay for the World War I reparations, which they warned could in turn pose a problem for the rest of Europe. It wouldn’t be long before this prophecies would prove to be a reality.

Hitler and the Rise of Other Dictators (Fascism)

Upon learning of the Treaty of Versailles, Germany became angry. It was an anger that was built upon frustration over losing the war, and anger over skyrocketing unemployment rates which were only about to get worse. During this time, Adolf Hitler saw an opportunity to entice the German people with his promises of easy solutions to the problems facing the Weimer Republic (the name of Germany at the time).

During this time, the political climate was ripe for radical affiliations and parties. One such party that was active during this time was the Nazi Party. Between the years of 1933 and 1934, Hitler took control over the party. However, it wasn’t long before he turned his reign into a dictatorship. After a failed coup to take over the Weimer government, Hitler decided to instead reach the top through legitimate means and was ultimately successful.

One of Hitler’s diplomatic strategies was to make ostensibly unreasonable demands and then threaten war if these demands were not met. When concessions were made, he accepted them and continued to make new demands. Hitler believed in a rightful expansion of the homeland of the Germanic people, and ruled Nazi Germany through a lens of anti-semitic hatred. Hitler ignored the Treaty of Versailles and greatly expanded the number of German troops.

France, Italy, and Britain tried to convince Hitler to not deploy his military by signing the Munich Agreement with Nazi Germany. Prime Minister Neville Chamberlain, of Britain, famously tried to avoid another world war with his policies of appeasement that involved negotiating with HItler over the right to land in Czechoslovakia. However, all efforts of diffusion were futile.

It does not help that, at the time, Hitler was not the only Fascist leader in Europe. In Italy, Benito Mussolini had been dictator since the 1920s. Mussolini had notably invented fascist politics. Though fascism differed from Nazism and was seen as less harsh, the two ideologies still had much in common as they were both heavily fueled by nationalism. In 1936, Mussolini showed his allegiance by signing a treaty with Hitler. 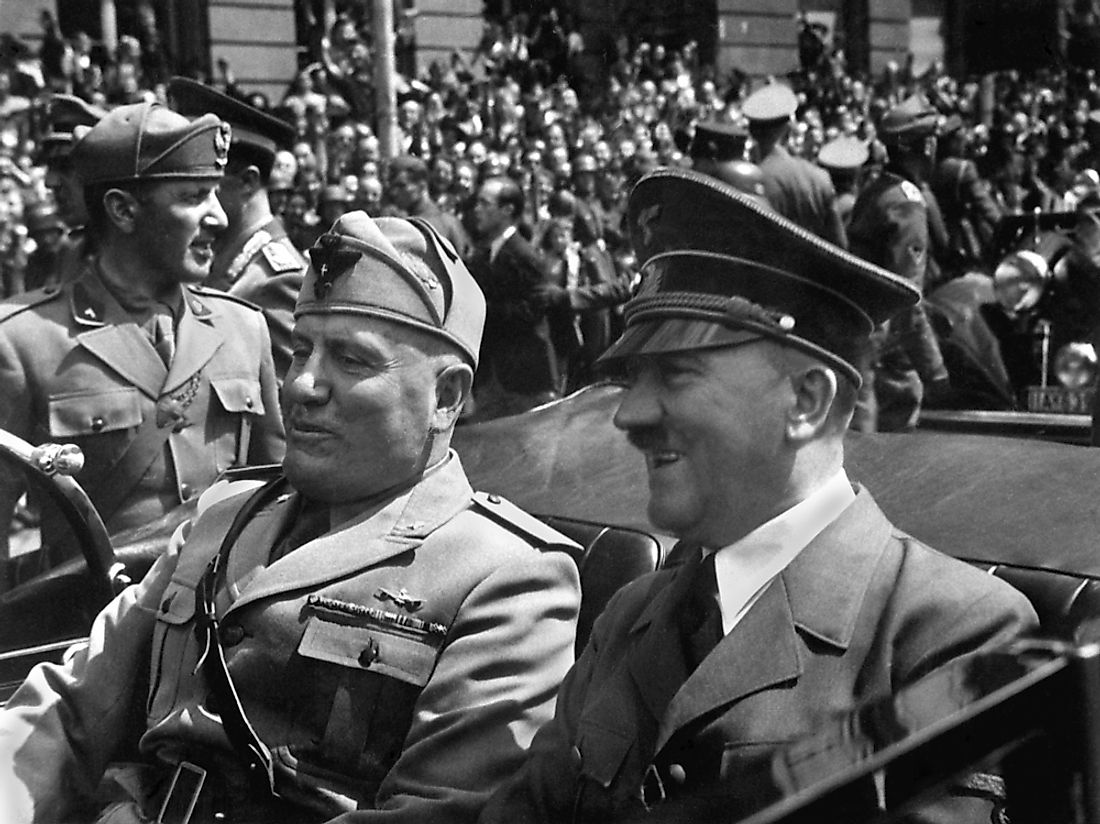 The Great Depression of the 1930s

From 1929 to 1939, the world was experiencing a devastating economic downturn, known as the Great Depression. There is no doubt that the Great Depression played a significant role in causing World War II. Factors such as mass unemployment in Germany and poverty in Japan provoked considerable anger among the citizens, causing them to be swayed by dictatorial governments which made it acceptable to forcefully loot from other countries whenever they wanted. As was hinted at earlier, most leaders, including Hitler, were opportunists who seized power by directing their citizen’s anger and hatred towards other countries. Anger was used by governments as a tool to control the people, who could easily be swayed by promises of jobs and a better quality of life.

The Japanese invasion of Manchuria (China)

In 1931, Japan invaded Manchuria in northeast China. Fearing international backlash, the Japanese government framed the Mukden Incident as a reason for their invasion. However, their real reason was the desire to capture Chinese territory, a project that had started in the late 1800s in the First Sino-Japanese War. The invasion started with the bombing of several cities including Guangzhou, Nanjing, and Shanghai where the Imperial Japanese Army carried out terrible war crimes.

The Italian Invasion of Ethiopia

Between 1935 and 1939, Ethiopia and Italy were at war following the Italian invasion of Ethiopia (also known as Abyssinia). Among Italy’s reasons for the invasion was the desire to provide more land and resources to hungry and impoverished Italians.

The German Invasion of Poland 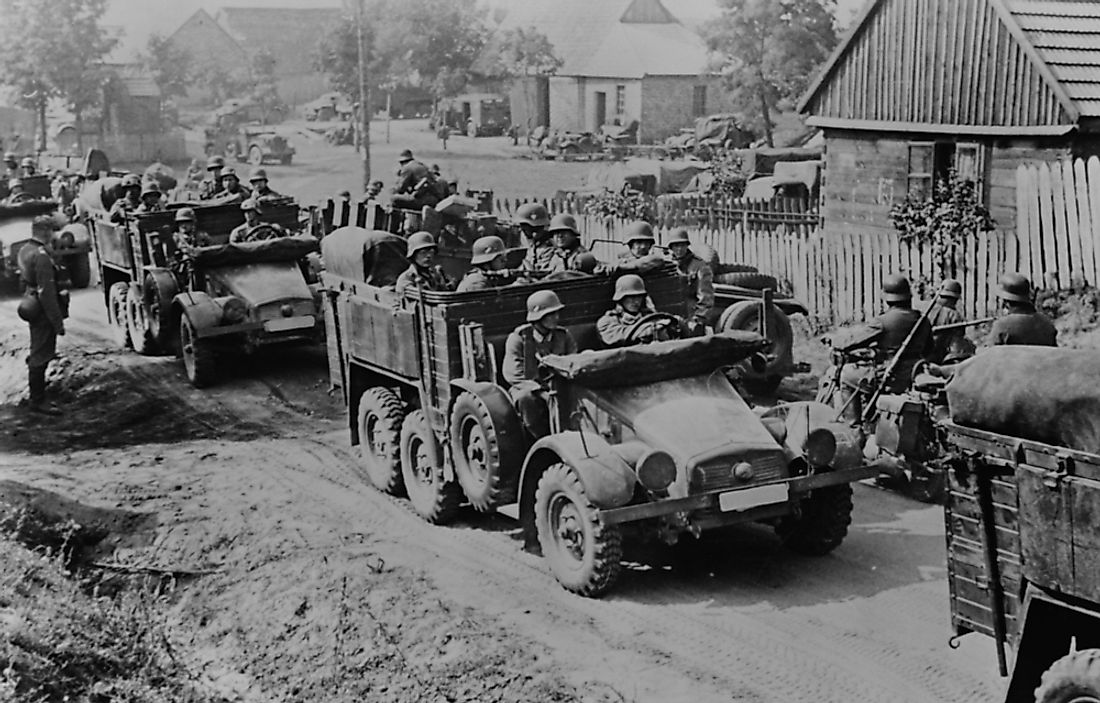 German soldiers invade Poland in September 1939. This moment is often seen as the beginning of the war.

Germany invaded Poland on September 1, 1939. Two weeks late, the Soviet Union followed suit. This is seen as the main point at which World War II began. Following the German attack, France and Britain both declared war on Germany.