After several weeks of mostly sheltering in place, after watching their 401ks crash and their toilet paper cache shrink, some people across the United States are starting to tire of what they see as this unBrave New World of ours. Protests across America are calling for an end to some coronavirus-breaking measures — the closing of businesses and the enforced isolation, mainly — that health officials insist are keeping us safe.

Even the president of the United States has jumped in on the act. “LIBERATE MINNESOTA,” “LIBERATE MICHIGAN,” “LIBERATE VIRGINIA,” he wrote in a series of tweets April 17.

A little civil unrest in a period of unrest for all of civilization? A loud, and perhaps too-early, plea for a return to normalcy during these abnormal times? Haven’t we been here before?

“I don’t think it’s uncommon, by any means. It usually comes in that second round [of a flu epidemic], when people say, ‘Well, if it comes back, then what was the point of all those measures you had before?’, or ‘We’ve had enough of this, we can’t stand it any longer,'” says Nancy K. Bristow, author of “American Pandemic: The Lost Worlds Of The 1918 Influenza Epidemic,” and the chair of the history department at the University of Puget Sound in Tacoma, Washington. “Business leaders, often supported by churchgoers, or church leaders and school leaders, often put on pressure pretty quickly and often even oppose the closures in the first place.”

Man in scrubs holding sign in front of #ReopenVirginia rally: “Distance because the science says so, not because the Governor says so”@CBS6 #rva 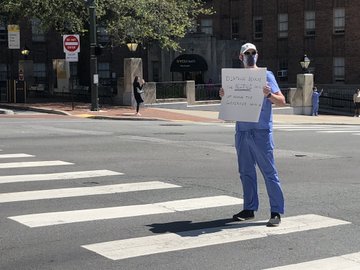 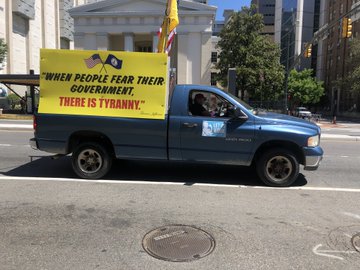 The Spanish Flu in San Francisco

That brings us to the 1918 influenza pandemic — often called the Spanish flu, though its origin remains uncertain. It infected more than 25 million people in America, killing some 675,000 of them on its way to wiping out nearly 50 million people worldwide. The flu spread in four waves throughout 1918 and 1919. The first came in 1918 and was thought, by many, to be just another seasonal flu.

One of the hardest hit places in the U.S. was San Francisco. Initially city leaders cracked down hard and was one of the first cities to implement strict orders to shut down the city. Schools and churches were closed, and large gatherings were banned. Social distancing was mandated, as were hygiene measures. (Sound familiar?)

In October 1918, the San Francisco board of supervisors ordered everyone to wear masks in public. Violators were subject to fines or even jail time. The measures appeared to work. By November, flu cases seemed to be on the decline, and San Francisco relaxed its strict orders, reopening bars, theaters and sports clubs, and revoking the mask ordinance.

However just a month later, cases of the flu spiked, and in January the mask ordinance was reinstated. But much of the public — including “The Anti-Mask League” — resisted the mandates that city leaders re-enacted to help blunt the spread of the disease.

The Oakland Municipal Auditorium was used as a temporary hospital with volunteer nurses from the American Red Cross tending the sick during the influenza pandemic of 1918.
NATIONAL ARCHIVES

In late 1918, as that second wave of the deadly flu tore through San Francisco, many residents pushed back against earlier measures that health officials adopted. Some of the population who had worn masks before now objected.

Tim Mak, an investigative reporter for NPR in Washington, D.C. came across a mention of a group in San Francisco in late 1918 and early 1919 that called itself the “Anti-Mask League.” The parallels between those citizens opposing the city mask ordinance in early 20th century San Francisco and the 21st-century Americans balking against shelter-in-place rules are striking.

“I was just super curious and thought I’d write a couple tweets on it,” says Mak, who ended up diving into the Anti-Mask League for more than four hours and tapping out dozens of tweets on it in an impressively detailed thread.

“The more I looked into it, the more I saw the same human elements that I see today. I see pushback from the business community. I see civil libertarians saying that these public health measures are too oppressive, and that if the government can be oppressive in forcing people to wear masks, it can be oppressive in any number of other ways as well.”

At least one individual, according to Mak’s research, sent a rigged up explosive device to the city’s public health official. In early April 2020, the U.S.’s top expert on the coronavirus, Dr. Anthony Fauci, faced enough threats to his safety that a personal security force was assigned to him.

An emergency flu hospital staffed by U.S. Navy Hospital corpsman was set up in the San Francisco Civic Center to help care for those stricken by the influenza.
UNDERWOOD ARCHIVES/GETTY IMAGES

An Anti-Mask League meeting Jan. 25, 1919, drew 4,500 members and, two days later, the group found a sympathetic ear in Charles Nelson, a member of the board of supervisors for the city and county of San Francisco. Nelson declared that the masks were an “infringement of our personal liberty and that it was not in keeping with the spirit of a truly democratic people to compel people to wear the mask who do not believe in its efficacy, but rather that it is a menace to their health.”

San Francisco Mayor James Rolph was not nearly as swayed:

Do you think I am going to stultify myself here against the wishes of 99 ½ percent of the doctors; against the officials of the army and navy? The people felt a great relief when the masking ordinance was put in effect … We should give our minds to serious matters instead of fighting the little inconvenience occasioned by the wearing of a mask for the protection of the general public.

As the cases eventually declined in San Francisco, the mask ordinance was rescinded. But by the end of February 1919, the city’s cases of influenza had doubled from its November count of 1,857 to 3,213. By the time the pandemic was over, an estimated 45,000 San Franciscans contracted the flu and 3,500 died of it.

The effectiveness of sometimes draconian-seeming public health measures was as much of a debate in 1918 and 1919 as it is today. Then, as now, officials end up weighing the health of the public against things like personal liberty and economic stability.

But 1918 and 1919 can inform us. They do inform those who study the history of pandemics.

“There’s very good research done by historians at the University of Michigan and people at the [Centers for Disease Control and Prevention] who have done a close analysis of different cities,” Bristow says. “It’s very clear that those cities that closed early and had a robust and intensive closure in place, and kept it on the longest, had the lowest death rate.

“It’s clear that acting with great caution makes the most sense.”

Whether officials today heed that lesson, and whether a restless public does so, may go a long way into determining how deadly the coronavirus of 2020 is.

A woman joins demonstrators outside Indiana Gov. Eric Holcomb’s mansion to protest what they are describing as “government overreach” as businesses and institutions remain closed during stay-at-home orders to combat the spread of COVID-19.
SOPA IMAGES/LIGHTROCKET VIA GETTY IMAGES
NOW THAT’S INTERESTING
Former San Francisco Mayor James Rolph evidently was a believer in masks. But he was caught with his mask down while attending a prizefight Nov. 16, 1918, when a mandatory masking ordinance still was in effect. He was reportedly fined $50 by his police chief.
via howstuffworks.com
Posted in Facts & History