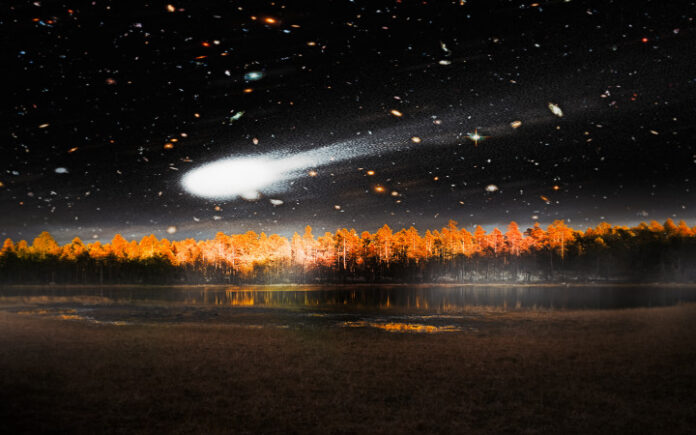 Have you ever watched a meteor shower? How about a solar eclipse? Maybe you’ve seen a comet soar overhead. Stare up at the sky long enough, and you’ll certainly see some pretty cool stuff!

Sometimes, though, science has difficulty explaining things people see in the sky. If you’ve been WONDERing with us for a while, you may already know about UFOs. Today’s Wonder of the Day is about another mystery—the Tunguska Event.

On June 30, 1908, strange reports poured in from Siberia. People felt a sudden, intense heat and heard loud bangs coming from near the Tunguska River. One person described seeing “the sky split in two.” People saw flames streak through the air above the forest’s trees.

Just after the event, some people pointed to aliens. They thought the heat and flames could have been caused by a spaceship from another planet. Locals even wondered if it was the work of an angry god. Due to the harsh Siberian conditions, it was years before a team of scientists could investigate the area.

In 1927, Leonid Kulik led a team to the site. Kulik worked in the St. Petersburg Museum’s meteorite collection as a curator. When they arrived, they found that trees at the center of the event were standing upright. However, they were stripped of all limbs and bark. Nearly two decades later, trees in Hiroshima, Japan, were left in the same condition after the city was hit by an atomic bomb.

Kulik’s team believed that a rock from space—like an asteroid or a comet—caused the Tunguska Event. However, it left no crater behind. To explain this, the team concluded that the rock must have exploded in the Earth’s atmosphere.

This was the leading explanation for nearly a hundred years. In 2020, though, experts gave an update. Scientists at the Siberian Federal University now believe an asteroid passed through the atmosphere instead of exploding. To do so, the rock must have been around 650 feet wide.

If these experts are right, the Earth had a very close encounter. The asteroid would have looked like a fireball in the sky as it streaked above the Siberian forest. Had it reached the ground, it would have made a crater around two miles wide.

Imagine you witnessed the Tunguska Event. How would you have explained it? Would you have thought it was a UFO? A comet? Event scientists are still trying to solve the case today!