Carbon is one of the most fascinating elements in all of nature, with chemical and physical properties unlike any other element. With just six protons in its nucleus, it’s the lightest abundant element capable of forming a slew of complex bonds. All known forms of life are carbon-based, as its atomic properties enable it to link up with up to four other atoms at a time. The possible geometries of those bonds also enable carbon to self-assemble, particularly under high pressures, into a stable crystal lattice. If the conditions are just right, carbon atoms can form a solid, ultra-hard structure known as a diamond.

Although diamonds commonly known as the hardest material in the world, there are actually six materials that are harder. Diamonds are still one of the hardest naturally occurring and abundant materials on Earth, but these six materials all have it beat. 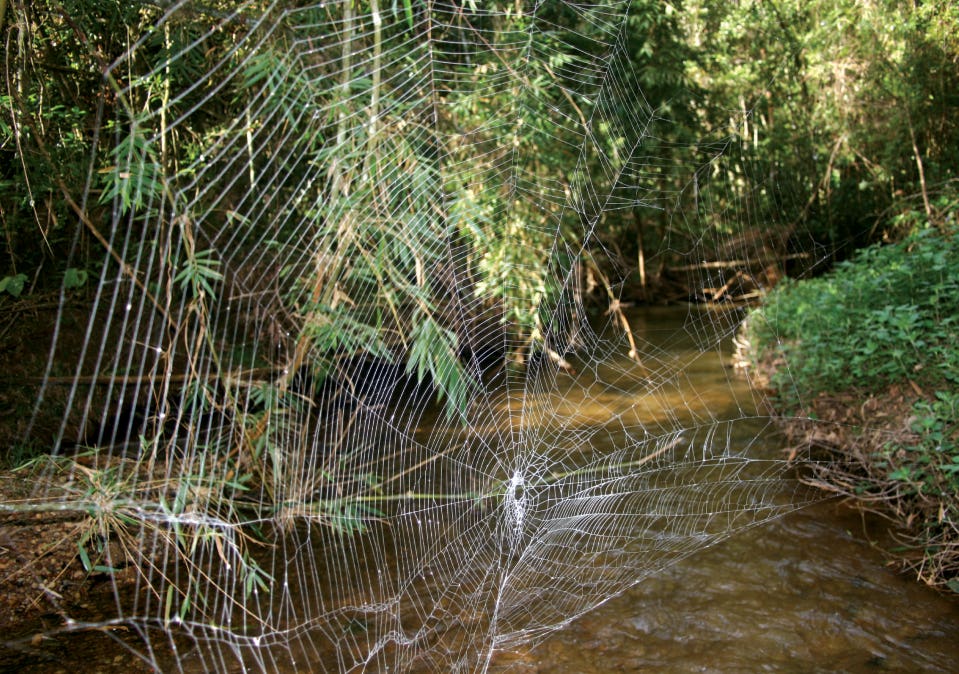 The web of the Darwin’s bark spider is the largest orb-type web produced by any spider on Earth, and… [+]

Honorable mention: there are three terrestrial materials that aren’t quite as hard as diamond is, but are still remarkably interesting for their strength in a variety of fashions. With the advent of nanotechnology — alongside the development of nanoscale understandings of modern materials — we now recognize that there are many different metrics to evaluate physically interesting and extreme materials.

On the biological side, spider silk is notorious as the toughest. With a higher strength-to-weight ratio than most conventional materials like aluminum or steel, it’s also remarkable for how thin and sticky it is. Of all the spiders in the world, Darwin’s bark spiders have the toughest: ten times stronger than kevlar. It’s so thin and light that approximately a pound (454 grams) of Darwin’s bark spider silk would compose a strand long enough to trace out the circumference of the entire planet.

For a naturally occurring mineral, silicon carbide — found naturally in the form of moissanite — is only slightly less in hardness than diamonds. (It’s still harder than any spider silk.) A chemical mix of silicon and carbon, which occupy the same family in the periodic table as one another, silicon carbide grains have been mass produced since 1893. They can be bonded together through a high-pressure but low-temperature process known as sintering to create extremely hard ceramic materials.

These materials are not only useful in a wide variety of applications that take advantage of hardness, such as car brakes and clutches, plates in bulletproof vests, and even battle armor suitable for tanks, but also have incredibly useful semiconductor properties for use in electronics. 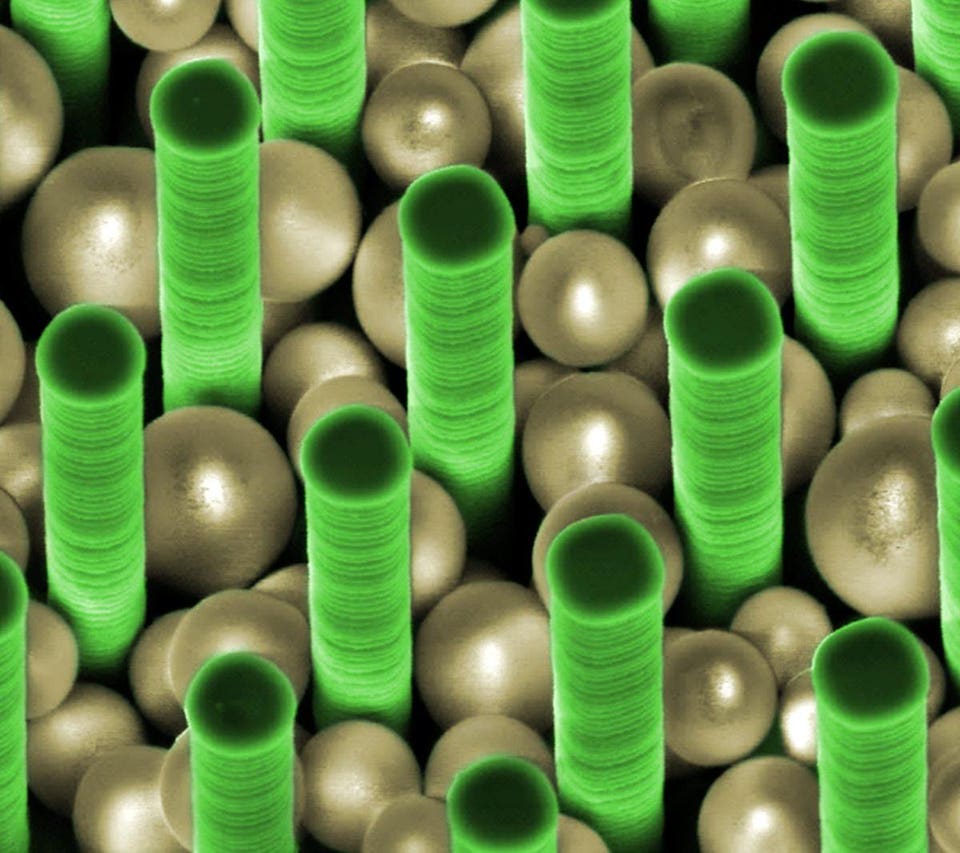 Ordered pillar arrays, shown here in green, have been used by scientists as advanced porous media to… [+]

Tiny silica spheres, from 50 nanometers in diameter down to just 2 nanometers, were created for the first time some 20 years ago at the Department of Energy’s Sandia National Laboratories. What’s remarkable about these nanospheres is that they’re hollow, they self-assemble into spheres, and they can even nest inside one another, all while remaining the stiffest material known to humankind, only slightly less hard than diamonds.

Self-assembly is an incredibly powerful tool in nature, but biological materials are weak compared to synthetic ones. These self-assembling nanoparticles could be used to create custom materials with applications from better water purifiers to more efficient solar cells, from faster catalysts to next-generation electronics. The dream technology of these self-assembling nanospheres, though, is printable body armor, custom to the user’s specifications. 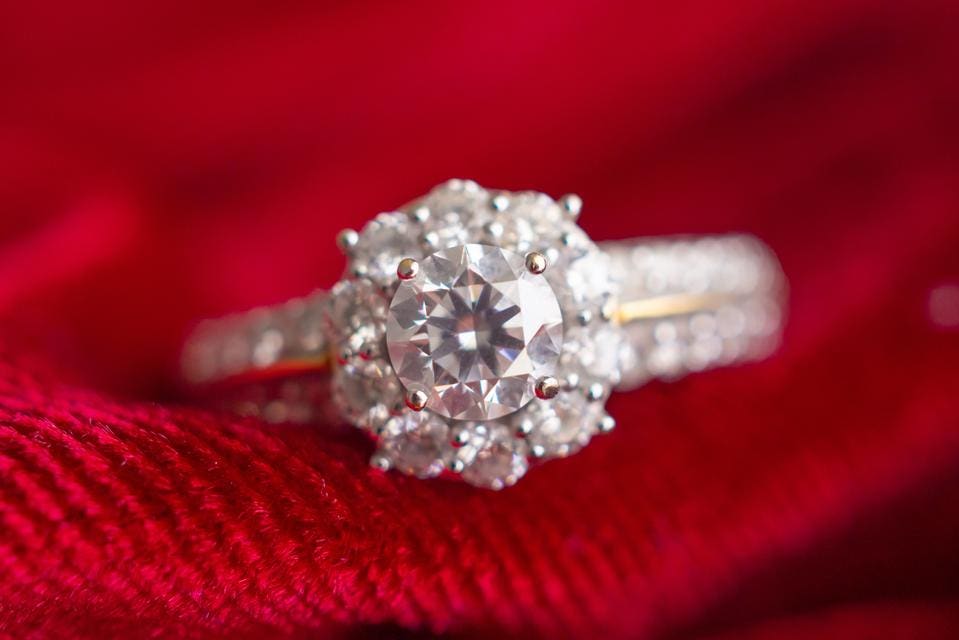 Diamonds may be marketed as forever, but they have temperature and pressure limits just like any… [+]

Diamonds, of course, are harder than all of these, and still clock in at #7 on the all-time list of hardest materials found or created on Earth. Despite the fact that they’ve been surpassed by both other natural (but rare) materials and synethetic, human-made ones, they do still hold one important record.

Diamonds remain the most scratch-resistant material known to humanity. Metals like titanium are far less scratch-resistant, and even extremely hard ceramics or tungsten carbide cannot compete with diamonds in terms of hardness or scratch-resistance. Other crystals that are known for their extreme hardness, such as rubies or sapphires, still fall short of diamonds.

But six materials have even the vaunted diamond beat in terms of hardness. Much like carbon can be assembled into a variety of configurations, Boron Nitride can take on… [+]

6.) Wurtzite boron nitride. Instead of carbon, you can make a crystal out of a number of other atoms or compounds, and one of them is boron nitride (BN), where the 5th and 7th elements on the periodic table come together to form a variety of possibilities. It can be amorphous (non-crystalline), hexagonal (similar to graphite), cubic (similar to diamond, but slightly weaker), and the wurtzite form.

The last of these forms is both extremely rare, but also extremely hard. Formed during volcanic eruptions, it’s only ever been discovered in minute quantities, which means that we’ve never tested its hardness properties experimentally. However, it forms a different kind of crystal lattice — a tetrahedral one instead of a face-centered cubic one — that is 18% harder than diamond, according to the most recent simulations.

Two diamonds from Popigai crater, a crater formed with the known cause of a meteor strike. The… [+]

5.) Lonsdaleite. Imagine you have a meteor full of carbon, and therefore containing graphite, that hurtles through our atmosphere and collides with planet Earth. While you might envision a falling meteor as incredibly hot body, it’s only the outer layers that become hot; the insides remain cool for most (or even, potentially, all) of their journey towards Earth.

Upon impact with Earth’s surface, however, the pressures inside become larger than any other natural process on our planet’s surface, and cause the graphite to compress into a crystalline structure. It doesn’t possess the cubic lattice of a diamond, however, but a hexagonal lattice, which can actually achieve hardnesses that are 58% greater than what diamonds achieve. While real examples of Lonsdaleite contain sufficient impurities to make them softer than diamonds, an impurity-free graphite meteorite striking the Earth would undoubtedly produce material harder than any terrestrial diamond.

This image shows a close-up of a rope made with LIROS Dyneema SK78 hollowbraid line. For certain… [+]

4.) Dyneema. From hereon out, we leave the realm of naturally occurring substances behind. Dyneema, a thermoplastic polyethylene polymer, is unusual for having an extraordinarily high molecular weight. Most molecules that we know of are chains of atoms with a few thousand atomic mass units (protons and/or neutrons) in total. But UHMWPE (for ultra-high-molecular-weight polyethylene) has extremely long chains, with a molecular mass in the millions of atomic mass units.

With very long chains for their polymers, the intermolecular interactions are substantially strengthened, creating a very tough material. It’s so tough, in fact, that it has the highest impact strength of any known thermoplastic. It has been called the strongest fiber in the world, and outperforms all mooring and tow ropes. Despite being lighter than water, it can stop bullets and has 15 times the strength of a comparable amount of steel. 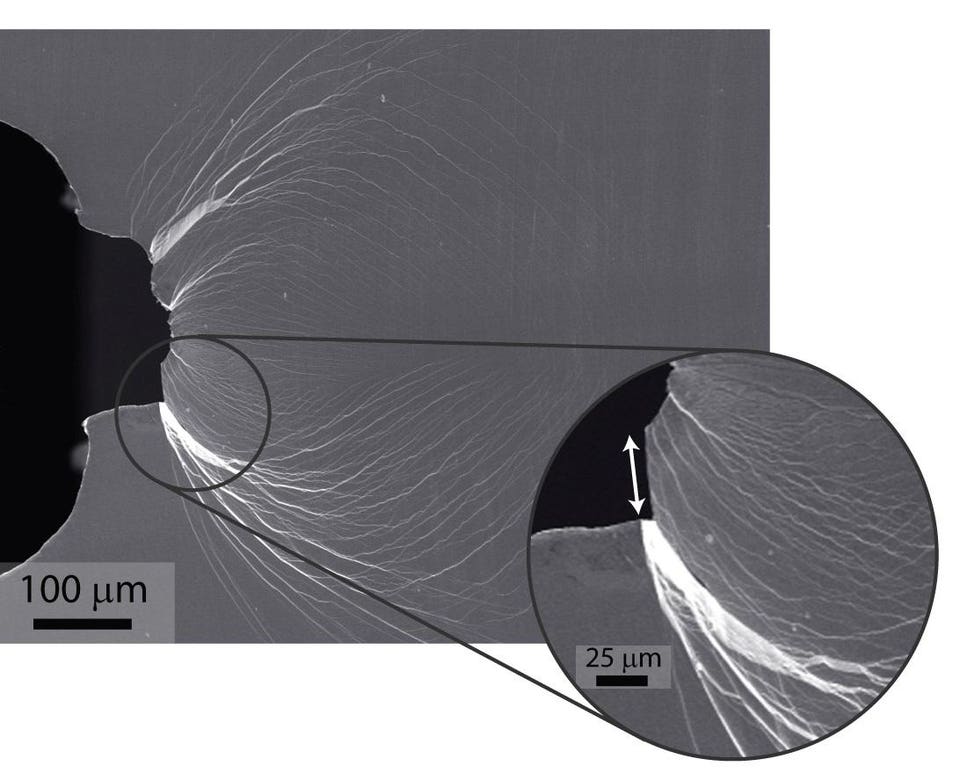 3.) Palladium microalloy glass. It’s important to recognize that there are two important properties that all physical materials have: strength, which is how much force it can withstand before it deforms, and toughness, which is how much energy it takes to break or fracture it. Most ceramics are strong but not tough, shattering with vice grips or even when dropped from only a modest height. Elastic materials, like rubber, can hold a lot of energy but are easily deformable, and not strong at all.

Most glassy materials are brittle: strong but not particularly tough. Even reinforced glass, like Pyrex or Gorilla Glass, isn’t particularly tough on the scale of materials. But in 2011, researchers developed a new microalloy glass featuring five elements (phosphorous, silicon, germanium, silver and palladium), where the palladium provides a pathway for forming shear bands, allowing the glass to plastically deform rather than crack. It defeats all types of steel, as well as anything lower on this list, for its combination of both strength and toughness. It is the hardest material to not include carbon. 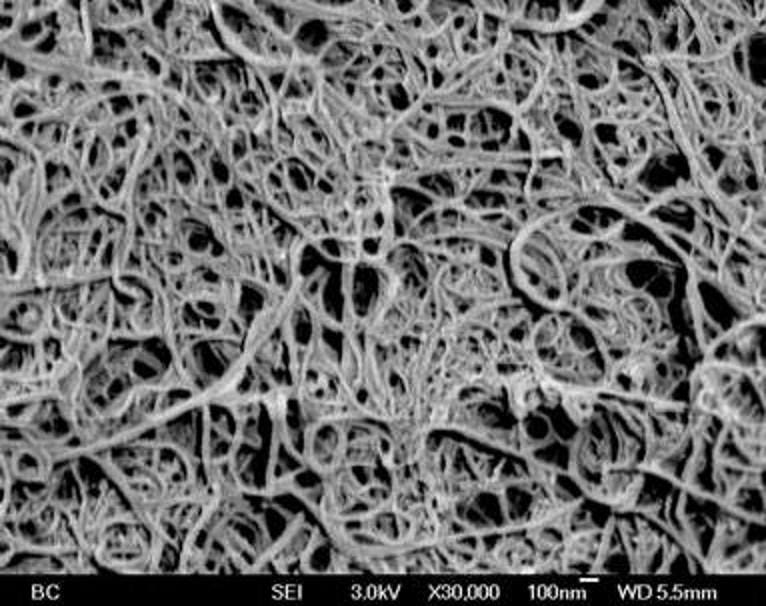 Freestanding paper made of carbon nanotubes, a.k.a. buckypaper, will prevent the passage of… [+]

2.) Buckypaper. It is well-known since the late 20th-century that there’s a form of carbon that’s even harder than diamonds: carbon nanotubes. By binding carbon together into a hexagonal shape, it can hold a rigid cylindrical-shaped structure more stably than any other structure known to humankind. If you take an aggregate of carbon nanotubes and create a macroscopic sheet of them, you can create a thin sheet of them: buckypaper.

Each individual nanotube is only between 2 and 4 nanometers across, but each one is incredibly strong and tough. It’s only 10% the weight of steel but has has hundreds of times the strength. It’s fireproof, extremely thermally conductive, possesses tremendous electromagnetic shielding properties, and could lead to materials science, electronics, military and even biological applications. But buckypaper cannot be made of 100% nanotubes, which is perhaps what keeps it out of the top spot on this list. 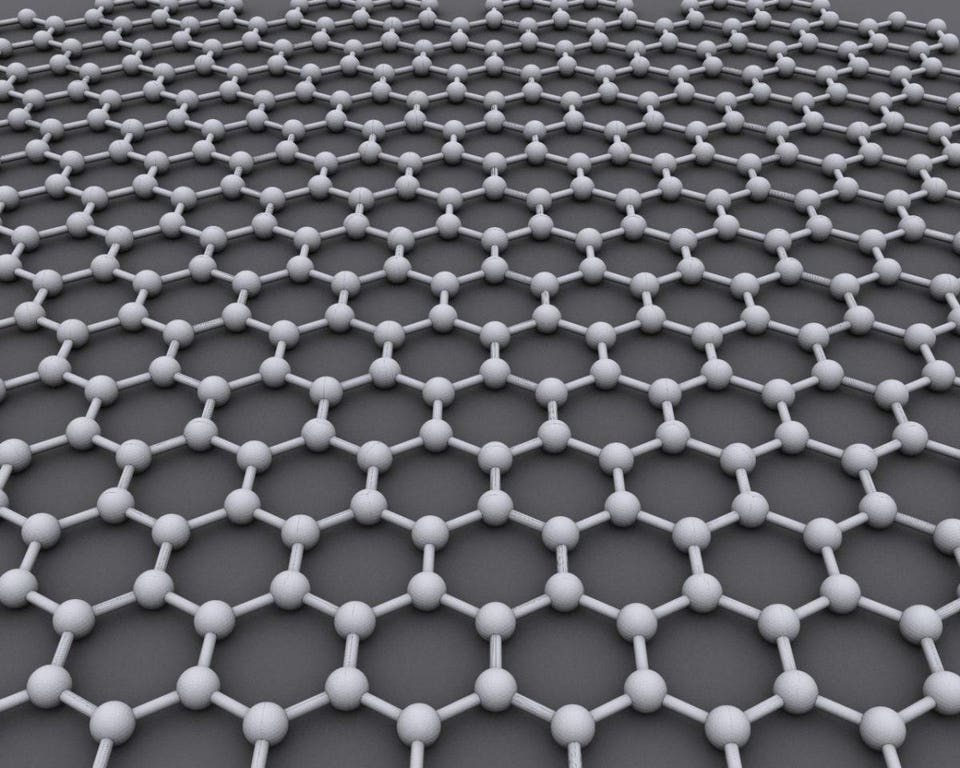 Graphene, in its ideal configuration, is a defect-free network of carbon atoms bound into a… [+]

1.) Graphene. At last: a hexagonal carbon lattice that’s only a single atom thick. That’s what a sheet of graphene is, arguably the most revolutionary material to be developed and utilized in the 21st century. It is the basic structural element of carbon nanotubes themselves, and applications are growing continuously. Currently a multimillion dollar industry, graphene is expected to grow into a multibillion dollar industry in mere decades.

In proportion to its thickness, it is the strongest material known, is an extraordinary conductor of both heat and electricity, and is nearly 100% transparent to light. The 2010 Nobel Prize in Physics went to Andre Geim and Konstantin Novoselov for groundbreaking experiments involving graphene, and the commercial applications have only been growing. To date, graphene is the thinnest material known, and the mere six year gap between Geim and Novoselov’s work and their Nobel award is one of the shortest in the history of physics. 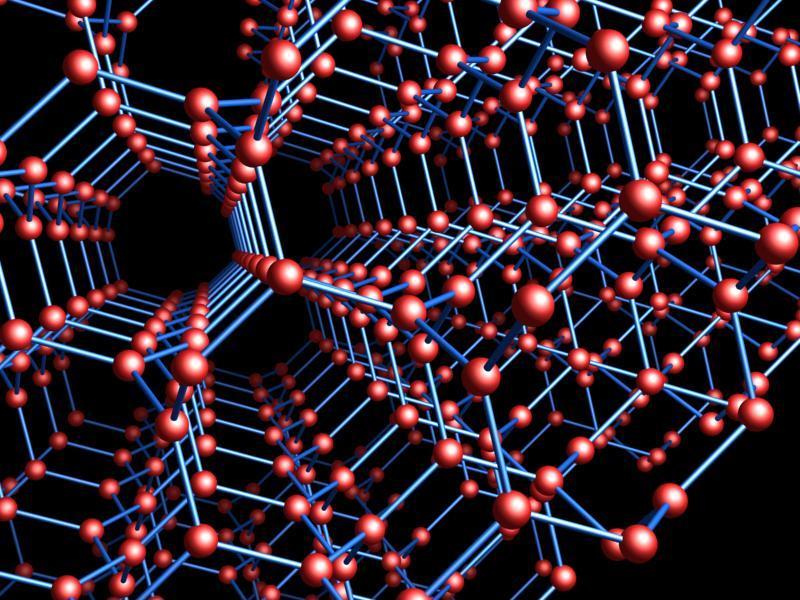 The K-4 crystal consists exclusively of carbon atoms arranged in a lattice, but with an… [+]

The quest to make materials harder, stronger, more scratch-resistant, lighter, tougher, etc., is probably never going to end. If humanity can push the frontiers of the materials available to us farther than ever before, the applications for what becomes feasible can only expand. Generations ago, the idea of microelectronics, transistors, or the capacity to manipulate individual atoms was surely exclusive to the realm of science-fiction. Today, they’re so common that we take all of them for granted.

As we hurtle full-force into the nanotech age, materials such as the ones described here become increasingly more important and ubiquitous to our quality of life. It’s a wonderful thing to live in a civilization where diamonds are no longer the hardest known material; the scientific advances we make benefit society as a whole. As the 21st century unfolds, we’ll all get to see what suddenly becomes possible with these new materials.