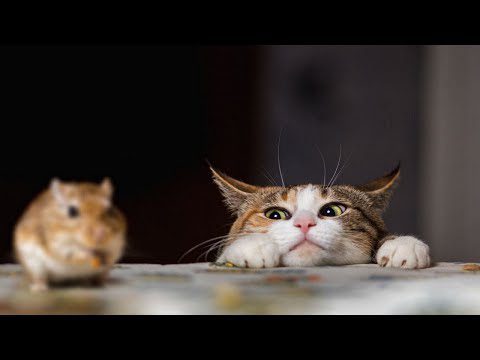 Even if a mouse has never seen a cat before, he’ll turn tail when one is nearby. Researchers suspected that the rodents somehow sniff out their would-be assassins, but exactly what they smelled was unclear. Now scientists have isolated the compound, one of a class of urinary proteins that are secreted by cats, snakes, and a variety of other predators.

Mice have two different ways to pick up scents: their nose and a specialized organ inside their nose called the vomeronasal organ (VNO), which helps them detect other mouse pheromones. Suspecting that VNO might help the rodents sniff out predators as well, neurobiologist Lisa Stowers of The Scripps Research Institute in San Diego, California, dropped cotton balls laced with either cat saliva, rat urine, or snake skin essence into the cages of both normal and mutant mice with inactive VNOs. The normal mice cowered in the corner, as if a predator were present. Meanwhile, the mutants weren’t afraid at all, even when an anesthetized rat was placed in their cage. “Some of the subjects were so relaxed that they actually curled up and went to sleep next to the rat,” Stowers says.

In addition, using dyes that light up when neurons are activated, the team saw neurons associated with VNOs turn on in response to the scents.

These mice were inbred in labs for hundreds of generations, none of them having ever seen a predator, Stowers notes. “This isn’t the mouse learning to recognize these cues,” she says, “he’s born with the ability to detect them.”

The next task was narrowing down exactly which predator scent compound was terrifying the mice. The team separated the components of the whole predator scent and introduced them to mice on cotton balls. Only one—a class of proteins found in urine and other secretions known as Mups, for major urinary proteins—elicited the same fear response as the whole predator scent in the mice. Most terrestrial vertebrates excrete Mups, and they are thought to play a role in intraspecies communication. Stowers, for example, has shown that Mups can cause male mice to fight, depending on how weak or strong they smell to their opponent. The team will report its findings tomorrow in Cell.

“This paper moves the field forward by about a century, because it actually identifies the proteins that are responsible for eliciting fear in mice,” says Leslie Vosshall, a neurobiologist at the Rockefeller University in New York City. It also shows that “Mups can be used not only for chemical conversations of animals in the same species, but they can also send information across species.”

Stowers says the research can teach us about how environmental cues are translated into fear in our own brains. “Fear behavior is … very conserved from mice to humans,” she says.