It’s hard to imagine daily life with an annual inflation rate of 1,000,000%. At that rate, the price of a cup of coffee doubles between your weekly paychecks. That is what the citizens of Venezuela

are facing, according to a recent report from the IMF. The story of how the country went from relative stability to hyperinflation involves more than economics; it’s a tale of corruption, social

It’s hard to believe, but Venezuela’s economy was once the envy of South America. Blessed with the largest oil reserves in the world, the country had a steady stream of USD revenue and immense

per-capita wealth. Then Hugo Chavez came into power in 1998. The near decade-long rise in oil prices that followed improved government finances and allowed the socialist regime to increase

both spending and borrowing. Their agenda was interrupted by a 2003 labor strike at PDVSA, the state-owned oil company. The strike severely impacted oil production and crippled the economy,

with GDP falling 27% during the first four months of 2003. After the strike, Chavez instituted a series of measures to stop the slide in the Bolivar, the Venezuelan currency, and seek revenge on

those responsible. The introduction of a currency peg, installation of import controls, the nationalization of other industries, and the establishment of subsidies for food and consumer goods all followed the strike. These actions sowed the seeds for the future inflation crisis.

Oil accounts for 96% of Venezuela’s exports, so when the price of crude collapsed in 2014, the economy took another major hit. According to the IMF, the Venezuelan economy shrank by 30% from

2013 through 2017, and the IMF is forecasting a fall in real GDP of 18 percent in 2018 alone. Government revenues have plummeted along with oil prices, and with fewer US dollars to spend on

imports, there is a scarcity of many products. But compared to 2003, the impact is more profound. Reliance on food and consumer goods imports increased during the oil price boom. Domestic

production decreased after years of added regulations (price controls, for example) and inefficient operations of nationalized businesses. In addition, there is a greater reliance today on the

government for the distribution of goods and services. Store shelves are bare and the black market prices for many basic items have soared.

A shrinking economy is causing large fiscal deficits, which the World Bank estimates to be greater than 20 percent as of 2015. The situation has gotten materially worse since then. Having run

down its foreign reserves from $30 billion in 2013 to less than $10 billion today, and with foreign direct investment from the US steadily declining from $600 billion per year in 2011 to below zero

today, the only option for the government to raise money is to issue local currency debt. Sanctions announced in May from the Trump administration compounded the difficulty in accessing

foreign currency by restricting Venezuela from selling debt in the US. The more money it prints to fund imports, the more the currency depreciates.

month annualized inflation rate is over 1,200,000%. That is hyperinflation not seen in the world since Germany in the 1920s or Zimbabwe in 2008. 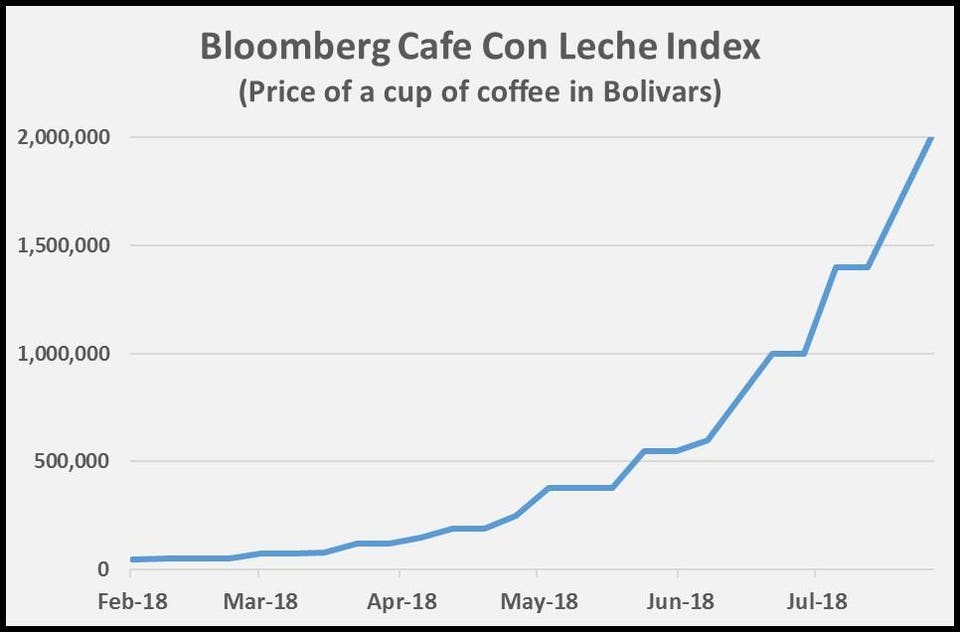 It is very difficult to arrest hyperinflation once it starts. Even though the government has raised the minimum wage four times this year, the average person cannot afford to live. And the country’s

finances are only going to get worse. Any tax receipts collected will be essentially worthless by the time they are received. The only solution was to print even more money.

And that’s where Venezuela stands today: it’s almost run out of foreign reserves, it has lost access to foreign debt markets, it is out of favor with other governments (except Iran) due to political corruption, its nationalized economy is horribly inefficient, and its people are literally starving in the streets.

The biggest fear for any investor is the loss of real savings due to hyperinflation. Some people argue that the inflation rate in the US is about to accelerate, wreaking havoc on the economy and the

standard of living. The good news is that there is a massive difference between a moderate rise in inflation and hyperinflation. To go from one to the other, using Venezuela as an example, requires

a mix of government mismanagement and corruption, an undiversified nationalized economy,  a reliance on imports for living essentials, no independent central bank and some sort of exogenous shock.

Could a situation like this ever happen in the United States? Right now, there is very little domestic inflation concern. Nor are all the ingredients present for what little inflation there is to spiral

out of control. Economists track US GDP inflation numbers to the fourth decimal place and financial markets direct the data to figure out whether the CPI number is rounded up or down. Maybe

we should start to worry when we round to the nearest the whole number, but not now. The US has to experience accelerating inflation before it could transition to hyperinflation. Let’s keep things

in perspective when the next CPI number is published.