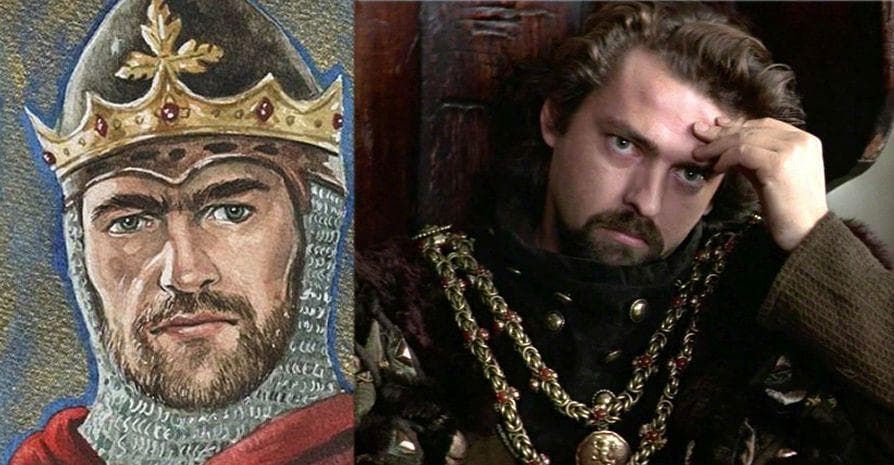 In fact, Robert the Bruce is the true Braveheart. He fought for Scottish independence even when it cost him his family and nearly his life. In order to win back his wife and daughter, King Robert chopped a man in half. And you’ll never believe how he got the nickname Braveheart. Needless to say, Braveheart ‘sequels’ about Robert the Bruce were long overdue.

Let’s Get One Thing Straight: This Guy Wasn’t Braveheart. Robert The Bruce Was Braveheart

Let’s start with the biggest problem in Braveheart: the title. William Wallace, the main character played by Mel Gibson, was not called Braveheart. Instead, the name always referred to Robert the Bruce. And the real Braveheart was tougher, craftier, and crazier than he was shown to be in the movie.

Robert the Bruce was the heroic Scottish King who successfully gained independence from the English. But it wasn’t easy – not by a long shot. Robert was born on July 11, 1274 into a noble family in Scotland. As a young man, Robert watched English King Edward I invade Scotland and seize control. And long after William Wallace was gruesomely executed by the English, Robert the Bruce kept fighting for freedom.

Robert The Bruce Stabbed His Rival To Death In A Church

In 1306, Robert the Bruce took on his greatest political rival, John Comyn. Bruce and Comyn had been guardians of Scotland together from 1298 to 1300, but after that, the two had split. Bruce ended up serving King Edward, while Comyn led the King’s enemies. In 1306, the two men met at the Greyfriars church. The meeting was intended to discuss “certain matters touching both of them,” according to a nearly contemporary account by chronicler Walter of Guisborough.

The two men spoke alone in front of the high altar. Suddenly, something changed – Bruce loudly accused Comyn of treachery and turned his back on the man. Then, Bruce drew his sword and ran it through Comyn. Bruce left the church while his followers began to brawl with Comyn’s men. He took Comyn’s horse and rode off. Bruce’s next action implied that the murder might have been politically motivated – he arrested King Edward’s justices and then sent his men back to Greyfriars to make sure Comyn was dead. Bruce had made two major enemies that day: Comyn’s supporters and family, and King Edward.

Scotland’s greatest military victory came in 1314 with the Battle of Bannockburn. On one side, Robert the Bruce led an army of around 6,000 infantrymen and a small group of cavalry. On the other side, Edward II, England’s King, amassed the largest army to ever invade Scotland, calling up 2,000 mounted knights and 25,000 infantrymen.

The odds were daunting, but King Robert started the battle off with a bang when he single-handedly took on an English knight and defeated him. Sir Henry de Bohun spotted King Robert and charged, hoping to capture or kill him. Bruce was not intimidated by the charging warhorse or the lance aimed at him – he hopped onto a horse and dodged the lance, bringing his battle axe down on de Bohun’s helmet and chopping the man in two.

After His Death, Robert’s Heart Went On Crusade To Spain And Was Thrown At Some Muslims–That’s Why He Was Called Braveheart

According to a 14th-century Scottish chronicler named John Barbour, Robert the Bruce always regretted that he never went on crusade. On his deathbed in 1329, Robert asked one of his knights to take his heart on crusade so that it could fight against God’s enemies. The knight, Sir James Douglas, carried Robert’s heart in a silver case, riding to Spain where war raged against the Moors.

In the heat of combat, Douglas was killed in a surprise attack – but before riding into battle, he reportedly threw the urn containing Robert the Bruce’s heart at the Muslims, shouting “Lead on brave heart, I’ll follow thee!” The heart was returned to Scotland after the battle, where it was later interred at Melrose Abbey in Scotland.

When Robert Lost A Battle, The English Killed His Brothers, Kidnapped His Daughter, And Locked His Sister In A Cage

After crowning himself King of Scotland in 1306, Robert the Bruce raised an army to face England’s Edward I at the Battle of Mathven. Robert’s army was defeated, and he was forced to flee, becoming an outlaw in the process. Robert’s wife and daughters were captured by the English, and three of his brothers were executed. Robert’s sister, Mary Bruce, was even imprisoned in an iron cage hung from the walls of Roxburgh castle.

Robert spent the winter hiding out on an island off the coast of Ireland in a cave. During that long, lonely winter, Robert the Bruce nearly gave up his fight for Scottish independence –until he met a spider.

While Robert was hiding out in a cave, he spotted a spider on a beam above his head. The small creature was trying to swing itself to another beam. The spider tried again and again, but it couldn’t make the jump. According to one legend, Robert counted six times that the spider failed, and he thought to himself, “six times have I fought against the English and failed.”

But the seventh time, the spider finally reached the beam and stretched the first line of its web. Robert the Bruce took that as a sign, leaving the cave behind to fight against the English. It took another eight years before he was able to drive them out of Scotland at the Battle of Bannockburn in 1314. All thanks to a spider.

If you watched Braveheart for the history (hint: don’t), you might think that Robert the Bruce stabbed William Wallace in the back, betraying him during the heat of battle. In fact, Robert the Bruce supported Wallace publicly, and he even used tactics he learned from Wallace in his fights against the English. Robert the Bruce did not betray Wallace at the Battle of Falkirk – Robert wasn’t even there.

Robert the Bruce did bide his time while Wallace was in hiding, until he proclaimed himself King of Scotland in 1306, the year after Wallace was captured by the English and executed.

Robert Did Work For The English – Before Seizing Power For Himself

After William Wallace was defeated by the English, Robert the Bruce was at risk of losing all his lands. Fortunately, they were not confiscated – and in 1298, Bruce became a guardian of Scotland with John Comyn. The two then became the greatest rivals for the Scottish throne.

During this period, Robert the Bruce often worked for Edward I, King of England – even though Robert had openly supported William Wallace’s fight for independence and would later crown himself King of Scotland. Later historians claimed this was evidence of Robert’s shifty allegiances and untrustworthiness. But the Scottish nobility was often forced to side with whomever held the power, and Robert had to be pragmatic in preserving his family’s lands.

But when Robert the Bruce saw an opening for power in 1306, he seized it.

In 1306, Robert The Bruce Crowned Himself King – But It Didn’t Go Smoothly

Not long after he killed Comyn, Robert crowned himself King of Scotland. The 14th-century chronicler Walter of Guisborough wrote that Robert “had himself crowned as King of Scotland at Scone,” an abbey, on March 25, 1306. Comyn had been dead for six weeks. Several bishops were in attendance, along with a number of important Earls. But the ceremony was somewhat makeshift, and most Scottish nobles stayed away, unwilling to publicly side with a usurper who might soon be defeated.

King Edward of England was enraged at Robert’s insolence. He began to form an army to march on Scotland immediately. Within six months, many of Robert’s supporters and family members were dead or in captivity.

After King Robert defeated an English knight in single combat, the Scots went on to rout the English on the first day of the Battle of Bannockburn. Before the second day, King Robert made a speech, encouraging the Scots to victory. Chronicler Walter Bower wrote, “At these words, the hammered horns resounded, and the standards of war were spread out in the golden dawn.”

The Scottish army cornered the English, and Bruce led the onslaught that finally broke his enemies, driving them back into the burn. By defeating a massive English army led by King Edward II, Robert was able to solidify his position as the King of Scotland and proclaim Scotland’s independence.

Robert Wasn’t The Only BA In The Family – His Mom Was Pretty Tough, Too

Robert the Bruce may have gotten his guts from his mother, Marjorie, the Countess of Carrick. She was the daughter of the Earl of Carrick in Scotland, and her first husband was killed in the Eighth Crusade of 1271. According to the stories, Robert the Bruce’s father was sent to tell Marjorie that her husband was dead. But she was so impressed with the man that she held him captive until he agreed to marry her. Not exactly your typical widow.

The two went on to have nine children together – Robert the Bruce was their oldest son.

Robert the Bruce didn’t just win Bannockburn for Scotland – he also won it so that he could get his family back. His wife, daughter, and sisters were still being held captive by the English, a full eight years after they had been seized in 1306. At Bannockburn, the Scots had taken so many English nobles prisoner that King Robert could trade them back for his family.

Robert’s daughter, Marjorie, had been confined to an English convent from before the time she turned 10 years old. After her father’s victory, Marjorie returned to Scotland, where her father arranged a marriage with a powerful Scottish lord. Sadly, Marjorie died only two years later, at the age of 19, after she fell from her horse while pregnant.

The Bruce Built An 11-Sided Castle In Loch Doon

When Robert the Bruce wasn’t claiming independence for Scotland or rescuing his daughter from the English, he was busy building castles. Or, at least, one important castle, Loch Doon Castle, which was constructed in the late 1200s. It had an 11-sided stone curtain wall, and King Robert’s brother-in-law fled to the new castle in 1306 after the English won the Battle of Methven.

The castle, originally build on an island in Loch Doon, was moved stone by stone in 1935 to preserve it, making it Britain’s only transplanted castle.