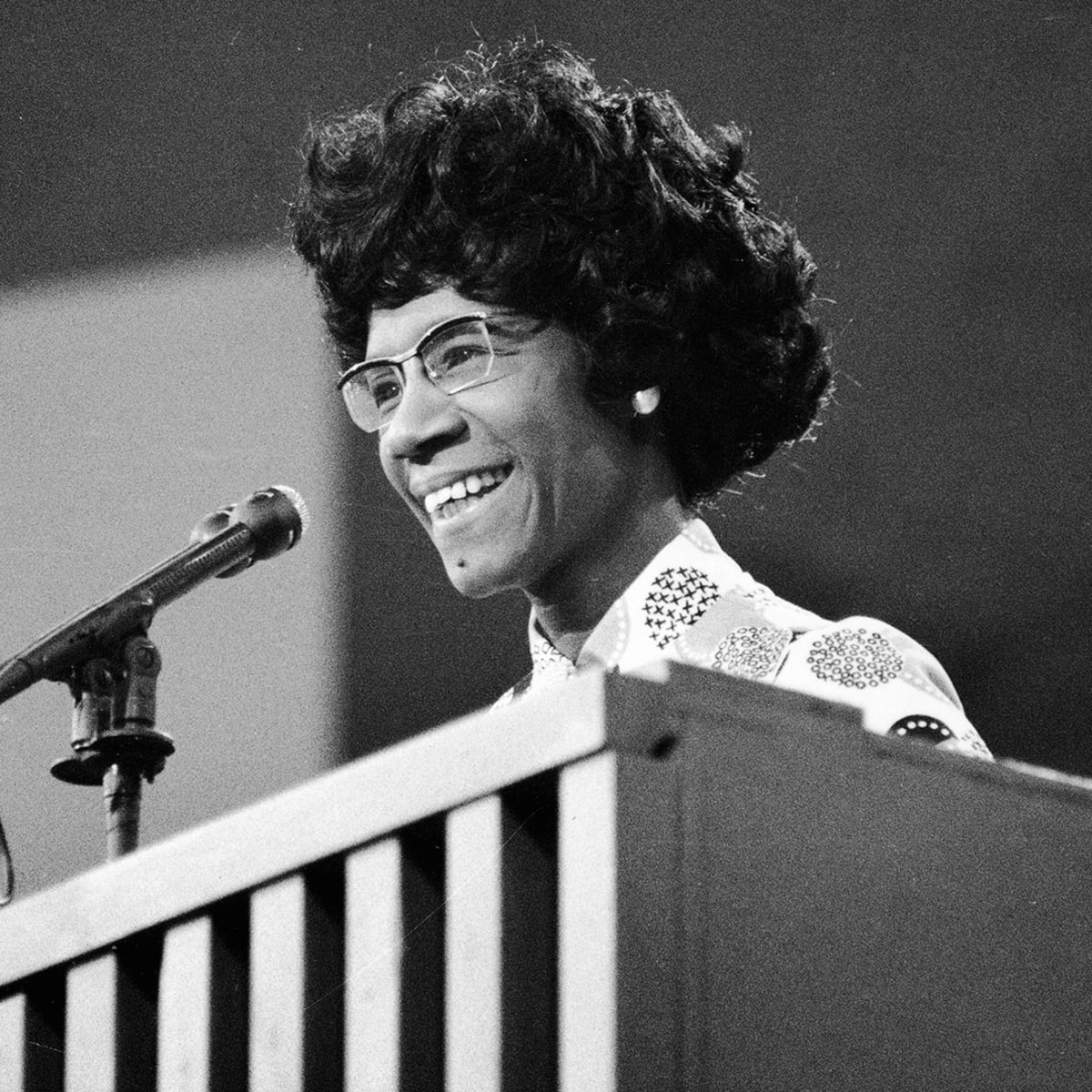 As the first Black American woman to run for U.S. president through a major party, the seven-term Congresswoman shook up the 1972 campaign.

Robert Gottlieb was standing by the luggage carousel waiting for his baggage to arrive after he landed in Raleigh, North Carolina in 1972 when was met with shock. There was no doubt those were his boxes, but someone had written all over one of them, “Go home n*****.”

It was clear what was inside the boxes: brochures and bumper stickers for Shirley Chisholm’s presidential campaign, for which he had been hired as the student coordinator. “That’s how the campaign began,” Gottlieb told Smithsonian Magazine in 2016.

That anonymous sign of hatred, even degrees removed from Chisholm herself, is proof of the kinds of language and insults that were being hurled at the candidate — yet she let none of it shake her at all. As the first major-party Black American to run for president, she forged ahead fearlessly, running to represent all the people of the country equally, no matter how they viewed her, as she announced at Brooklyn’s Concord Baptist Church on January 25, 1972, when she declared her candidacy.

And that was exactly what her historical presidential run did.

Chisholm already made history as the first Black congresswoman

By the time Chisholm was putting her hat in the ring for the 1972 Democratic presidential bid along with white male candidates George McGovern, Hubert Humphrey, Edmund Muskie, Henry M. Jackson and George Wallace, she had already been a barrier breaker, most notably becoming the first Black congresswoman in 1968.

The Brooklyn-born politician was a former nursery school teacher turned New York City Division of Day Care consultant, who was elected as a New York State assemblywoman in 1964. But it was during her 1968 campaign for the New York 12th Congressional District’s House seat that she truly started to show that she had what it took to win a hard-wrought campaign.

She quickly branded herself with toughness, regularly starting off her speeches with “This is Fighting Shirley Chisholm.” She also highlighted diversity by using her Spanish language skills, which she picked up while working in education, to speak to her Spanish-speaking constituents.

The tactics worked and she defeated her opponent James Farmer by more than a two-to-one margin. And in her victory speech, she kept it about the people. “My dear friends, tonight is a very important night… not so much for me, but for you, the people of this community,” she said. “After many years of struggle and sacrifices on the part of several of you here this evening, we have at long last been able to elect today a voice that shall be your voice in the halls of the United States Congress.”

She brought her smarts — and sass — to the House

As a newbie to the House of Representatives, Chisholm was assigned to a committee. The one chosen for her despite her history growing up in the concrete jungle of New York: House Agriculture Committee. “Apparently all they know here in Washington about Brooklyn is that a tree grew there,” she so famously said that President Barack Obama even quoted it when she awarded her the Presidential Medal of Freedom posthumously in 2015.

But she soon found her way, using her educational background to fight for the Head Start program, as well as school lunches. She also was a founding member of the Congressional Black Caucus and Congressional Women’s Caucus and also one of only 19 representatives who were willing to hold Vietnam War hearings.

Chisholm stepped up and took her shot at the presidency

While the Civil Rights Act of 1964 had only been signed a few years prior, discrimination with voting rights was still rampant throughout the nation. It was a time when “judging from what some Republican officials have been saying and doing, [the incumbent president] Richard Nixon has written off the black vote as unattainable and, what’s more, unimportant,” The New York Times wrote in a 1972 story.

But two Black men — Georgia’s Julian Bond and former Cleveland mayor and congressman Carl Stokes — considered runs and started strategizing. But Chisholm wasn’t about to sit around. “They were standing around, peeing on their shoes, so Shirley finally said the hell with it and got a campaign going,” a Chisholm aide told The New York Times. “If she hadn’t, we’d still be without a black candidate.”

Bond responded, “She was absent from most discussions on strategy…We may have been peeing on our shoes, but if we were, she wasn’t around to get splashed.”

Her campaign was not well received, even by fellow Black politicians

As the campaign was progressing, the Vietnam War was still being fought and the women’s movement was just starting to emerge. Fighting Shirley used it as fuel to forge ahead. “There are people in our history who don’t look left or right, they just look straight ahead,” Obama said of her in 2015, noting that she was “driven by a profound commitment to justice.”

With the slogan “Unbought and Unbossed,” Chisholm thought that she might be able to use her historic run to rally up both the female and minority voters. She also heralded a personal understanding of the needs of the poor and disenfranchised more than any other candidate.

“But these traits are not the stuff of which election victories are made,” The New York Times noted of the big hole in her campaign. “Victory requires money, well‐placed support and slick, professionally-led political organization.”

Indeed, she had only started her presidential run with about $40,000 — the paper said that was just a fraction of what other candidates spent on TV ads for just a primary election in one state. And on top of that, getting top tier support proved to be a challenge. Feminist icon Gloria Steinem, who seemed like a likely Chisholm support, sided with her opponent George McGovern, as did Jesse Jackson.

“Mrs. Chisholm encountered a Black leadership that was divided and occasionally hostile wherever she campaigned,” The New York Times said. “In North Carolina, Black leaders went so far as to proclaim publicly that ‘a vote for Shirley Chisholm is a vote for George Wallace,’” referring to the “semi-reformed segregationist who ran openly racist campaign advertisements,” as the Smithsonian described him.

And as proof of just how untraditional Chisholm was, when Wallace became paralyzed after an assassination attempt, she went and visited him in the hospital.

Chisholm was proud that she ‘shook things up’

In the end, the trailblazer only received 152 delegate votes at the Democratic National Convention and McGovern went on to win the party’s nomination but lost the presidency to Nixon. But for Chisholm, that wasn’t necessarily defeat. After all, from the start, she had said, “Regardless of the outcome, they will have to remember that a little hundred‐pound woman, Shirley Chisholm, shook things up.”

And she kept on shaking things up, eventually serving seven terms in the U.S. House of Representatives, continuing to open up opportunities everywhere she went, with her famous attitude: “If they don’t give you a seat at the table, bring your own folding chair.”

Chisholm died on New Year’s Day 2005, but the path she paved was one that hasn’t been lost on Kamala Harris, who is the first female U.S. vice president of Black and South Asian descent. “We stand on the shoulders of Shirley Chisholm and Shirley Chisholm stood proud,” Harris said.