There is a history to who among the British royals gets to use a surname, and what that last name must be.

Lilibet Diana Mountbatten-Windsor, the newborn and second child of Prince Harry and Meghan Markle has made quite the news with her name. Her first name, Lilibet, is a tribute to Queen Elizabeth as it was her nickname since she was a little girl. Her second name, Diana was selected to honour her late grandmother, the princess of Wales and mother of Prince Harry. Her last name, Mountbatten-Windsor is interesting, since not all royals carry a surname. Lilibet’s cousins, the children of Prince William and Catherine Middleton for instance, do not use a surname. There is a history to who among the British royals gets to use a surname, and what that last name must be.

The story behind Mountbatten-Windsor

Mountbatten and Windsor are the family names of Prince Philip and Queen Elizabeth respectively. The House of Windsor family name was agreed upon by King George V in 1917. Before that, the royal family of the United Kingdom belonged to the German House of Saxe-Coburg and Gotha. The first sovereign of the house was Ernest I who ruled over the dutchy by the same name from 1826 until his death in 1844. His eldest son, Prince Albert married Queen Victoria in 1840.

Since as per tradition sovereigns took the name of their ‘house’ from their father, Queen Victoria’s eldest son, King Edward VII belonged to the Saxe-Coburg and Gotha. His son, George V, who succeeded to the throne in 1910 had dropped the family name. In 1917 the First World War was at its peak and anti-German sentiment was running high among the people of Great Britain. It was in these circumstances that the British royal family decided to change all German titles and house names to anglicised forms. King George V issued a royal proclamation in July 1917 declaring:

Now, therefore, We, out of Our Royal Will and Authority, do hereby declare and announce that as from the date of this Our Royal Proclamation Our House and Family shall be styled and known as the House and Family of Windsor, and that all the descendants in the male line of Our said Grandmother Queen Victoria who are subjects of these Realms, other than female descendants who may marry or may have married, shall bear the said Name of Windsor

And do hereby further declare and announce that We for Ourselves and for and on behalf
of Our descendants and all other the descendants of Our said Grandmother Queen Victoria
who are subjects of these Realms, relinquish and enjoin the discontinuance of the use of the
Degrees, Styles, Dignities, Titles and Honours of Dukes and Duchesses of Saxony and Princes
and Princesses of Saxe-Coburg and Gotha, and all other German Degrees, Styles, Dignities.
Titles, Honours and Appellations to Us or to them heretofore belonging or appertaining.

The King also decided to restrict the use of British princely titles to only those nearest to him. In 1919, for instance, he stripped three of his German relations from British titles.

The Mountbatten family name of Prince Philip too has its origins in the period of the First World War. It is an anglicised version of ‘Battenberg’ which was the dynasty ruling over the Grand dutchy of Hesse in Germany. Two of the descendants of the Battenburg family got associated with the British royal family in the 19th century. Prince Henry of Battenberg married Princess Beatrice, the youngest child of Queen Victoria, while his brother Prince Louis of Battenberg married the Queen’s granddaughter Princess Victoria of Hesse and Rhine. Louis and Victoria’s daughter, Princess Alice of Battenberg, was the mother of Prince Philip. Her brother, Louis Mountbatten was the last Viceroy of India.

Members of the House of Windsor on the balcony of Buckingham Palace. (Wikimedia Commons)By 1939, when Prince Philip met and fell in love with Queen Elizabeth, he had taken on his mother’s surname, even though his father’s side was Greek and Danish. By then, the Battenberg had also been given up in preference to Mountbatten. On account of the anti-German sentiment in Britain during the First World War, Prince Louise had dropped the Battenberg surname just three days before the British royal family had their family name changed to Windsor. He along with his children and nephews also gave up on all German titles. King George V compensated them with British titles.

Even though Queen Elizabeth II had confirmed House of Windsor to be the family name when she succeeded to the throne in 1952 much to the disappointment of her husband, in 1960 she and Prince Philip decided that they would like their direct descendants to take both their family names as Mountbatten-Windsor. Other male line descendants of King George V continue using the surname Windsor.

The selective use of the surname

Interestingly, only some among the direct descendants of Queen Elizabeth II and Prince Philip get to use the surname Mountbatten-Windsor. It also acts like a hidden surname, used only when one is required. For instance, when Princess Anne married Captain Mark Philips in 1973, the surname was used in the official marriage register at Westminister Abbey. That was the first time the surname came to be used officially. It was used similarly when Prince Andrew got married in 1986.

As per tradition, royals with titles sign themselves with their first names only. But not everyone in the royal family holds a princely title. King George V issued a Letters Patent in 1917 proclaiming that the great grandchildren of the monarch, apart from the eldest, would not automatically become prince or princesses. 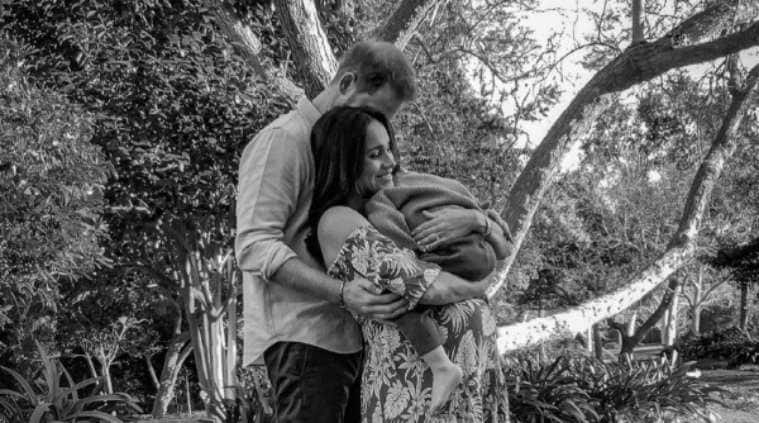 Prince Harry and Meghan Markle with son Archie (Misan Harriman/Instagram)“The grandchildren of the sons of any such Sovereign in the direct male line (save only the eldest living son of the eldest son of the Prince of Wales) shall have and enjoy in all occasions the style and title enjoyed by the children of Dukes of these Our Realms,” the patent stated.

As per this order, only Prince George, the eldest son of Prince William and third in line of succession was supposed to hold a title. However, in 2013, the Queen issued a Letters Patent that bestowed the royal title upon all of William’s children.

Since Prince Harry and Meghan Markle’s children, Archie and Lilibet do not hold royal titles, they use the surname Mountbatten-Windsor.