The idea of eight-legged mites that have sex on your face and nipples while you sleep may sound like a concept from the latest horror blockbuster.

But the creatures are very much real and are becoming such simplified organisms that they may soon ‘become one with humans,’ according to a new study.

Demodex folliculorum mites are carried by almost every human on the face, eyelashes, and nipples, moving between follicles looking for a mate.

Researchers from the University of Reading have sequenced a mite’s genome for the first time, and found inbreeding is causing them to shed unnecessary genes and cells.

Worryingly, the team says that the mites are moving towards a transition from external parasites to ‘internal symbionts’ that live within us.

The mites measure just 0.01 inches (0.3mm) long, and are passed on during birth.

In their study, the researchers set out to explain their bizarre mating habits, body features and evolutionary future, by analysing their DNA.

Dr Alejandra Perotti, who co-led the research, said: ‘We found these mites have a different arrangement of body part genes to other similar species due to them adapting to a sheltered life inside pores.

‘These changes to their DNA have resulted in some unusual body features and behaviours.’

Mites live an isolated existence, with no exposure to external threats.

For this reason, the mites are shedding unnecessary genes and cells, and surviving with the minimum number of proteins, according to the researchers.

Among the genes lost are those that provide UV protection and that cause animals to be awakened by daylight, which explains their nocturnal behaviour.

And while the mites have lost their ability to produce melatonin – a compound that makes invertebrates active at night – they can still fuel their evening mating sessions using melatonin secreted from human skin.

The mites also have strange mating habits because of their unique gene arrangement.

The males have a penis that protrudes upwards, meaning they must position themselves underneath the female, while both cling onto the human hair.

One of their genes has inverted, giving them a protruding arrangement of mouth-appendages for gathering food.

This also aids their survival at young age, according to the researchers.

Previous studies have suggested the mites lack an anus, and that faeces accumulates through their lifetimes before being released when they die.

For this reason, the mites have been blamed for several skin and eye conditions, including rosacea and blepharitis.

However, the new study confirms that they do have anuses, and indiates mites have been ‘unfairly blamed’ for these conditions.

While new mates could add new genes to offspring, the mites are not being exposed to potential mates, and are instead inbreeding.

Overall, the researchers say this could cause mites to become symbionts, and warn they could be on course for an ‘evolutionary dead end’.

Dr Henk Braig, co-lead author from Bangor University and the National University of San Juan, said: ‘Mites have been blamed for a lot of things.

‘The long association with humans might suggest that they also could have simple but important beneficial roles, for example, in keeping the pores in our face unplugged.’ 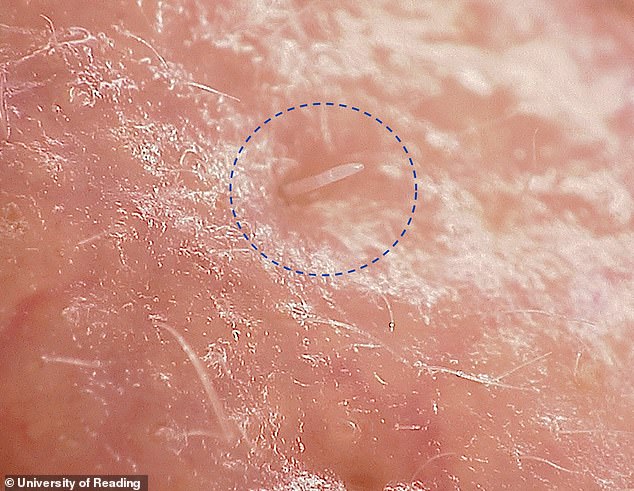