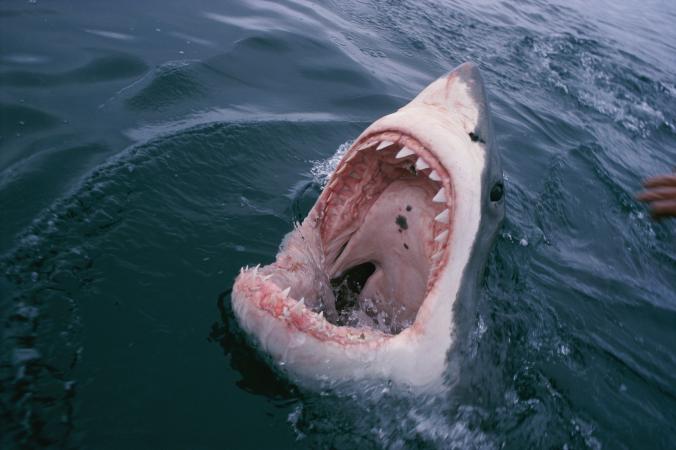 The best way to prepare yourself for a possible shark encounter is to know how to avoid an attack, what to do if you are bitten, and how to help attack victims.

How to Avoid An Attack

• Stay away from the mouths of rivers after heavy rains, when freshwater fishes and other animals are swept out to sea.

• Swim clear of fishing boats. They often trail fish remains and blood, which can draw sharks

• If you’re bleeding, including menstruating, stay on the beach.Sharks can smell and taste even the smallest amount of blood from over a mile (1.6 kilometers) away and trace it back to its source.

• Stay out of the water if fish blood or baitfish are present. In other words, steer clear of fishers.

• Avoid large groups of fish, seals, or sea lions. They all are prominent on the shark’s menu.

• Stay away if you see large groups of dolphins and seabirds. They are attracted to the same food sharks eat. And don’t make the mistake of thinking that if dolphins are present, there won’t be any sharks around. Dolphins can be prey for large sharks.

• Stay away from dead animals in the water.

• Stay out of the water at dawn, dusk, and night, when some species of sharks may move inshore to feed on fish. Sharks are well equipped to locate prey even when visibility is poor.

• Do not wear high-contrast clothing (orange and yellow are said to be risky colors) or shiny jewelry (which may appear to be like fish scales). Sharks see contrast very well.

• Refrain from excessive splashing. Keep pets, which swim erratically, out of the water. Sharks are attracted to such activity.

• Leave the water quickly and calmly if a shark is sighted. Do not provoke, harass, or entice a shark, even a small one.

• If fish or turtles start to behave erratically, leave the water. They may be behaving like that because there is a shark in the area.

• If you feel something brush up against you, get out of the water to make sure that you have not been bitten. There have been reports that shark-bite victims often do not feel any pain.

• Swim, surf, or dive with other people. Sharks most often attack individuals.

• Don’t wander too far from shore. Doing so isolates you and places you away from assistance.

What To Do If You’re Attacked

• If attack is imminent, defend yourself with whatever weapons you can, advises the ReefQuest Centre for Shark Research. “Avoid using your [bare] hands or feet if you can avoid it; if not, concentrate your blows against the shark’s delicate eyes or gills.” A shark’s snout is also said to be sensitive.

• If a shark actually gets you in its mouth, says ISAF’s George Burgess, “I advise to be as aggressively defensive as you are able. ‘Playing dead’ does not work. Pound the shark in any way possible. Try to claw at the eyes and gill openings, two very sensitive areas.”

• If bitten, try to stop the bleeding. Leave the water as efficiently, calmly, and swiftly as possible. While many sharks will not bite again, you cannot rule out a second attack.

• Get immediate medical attention, no matter how small the injury.

How to Help a Victim

• Remove the victim from the water as soon as possible.

• Even before you leave the water, begin controlling bleeding by pressing on pressure points or by applying tourniquets.

• Protect the victim from cold by wrapping him or her in a blanket to minimize heat loss.

• Once out of the water try not to move the victim unnecessarily. Call for medical help.