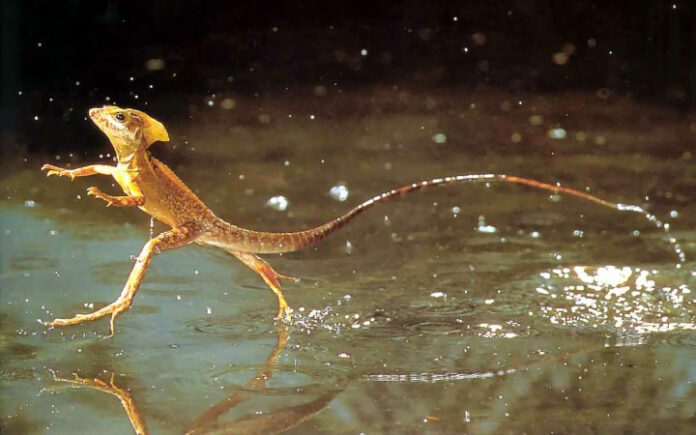 When your family goes on vacation, do you hope your destination is somewhere near water? Whether it’s a giant ocean, a raging river, a placid lake, or simply a swimming pool, there’s nothing quite like playing in the water.

What do you like to do in the water? You can jump in the water. You can also dive, swim, splash, and play. There’s probably one thing you don’t think about doing, though: walking. Unless you have supernatural powers, walking on water probably isn’t on your to-do list.

Its names come from the unique crest on its head that’s used by males to attract females. The crest reminds some people of a rooster. This, in turn, led to being compared to the mythical creature known as the Basilisk, which was half rooster and half lizard.

The green basilisk lizard also goes by another much more common nickname: Jesus Christ lizard. This nickname comes from the reptile’s unique ability to run on water.

Growing to around two feet long (including their tails), basilisk lizards are related to iguanas. They call the tropical rain forests of Central America home and can be found in abundance from southern Mexico all the way down to Panama.

They like to spend most of their time in trees, but they’re also never far from a body of water. If a predator, such as a snake or a bird, finds them in a tree, they can drop into the water below and run quickly across its surface to safety. This unique ability also comes in handy when hunting prey, such as insects and small vertebrates.

How do they do it? Basilisk lizards have special toes on their rear feet. These long toes have fringes of skin like scales that spread out in the water to increase the surface area of the foot making contact with the water.

When they run on water, they pump their legs rapidly, slapping their feet hard against the water. This action creates tiny pockets of air that keep them suspended on top of the water as long as they maintain a fast pace.

Basilisk lizards can run on water for several meters. Eventually, gravity will take over, though. When that happens, these amazing lizards simply rely on their strong swimming skills.