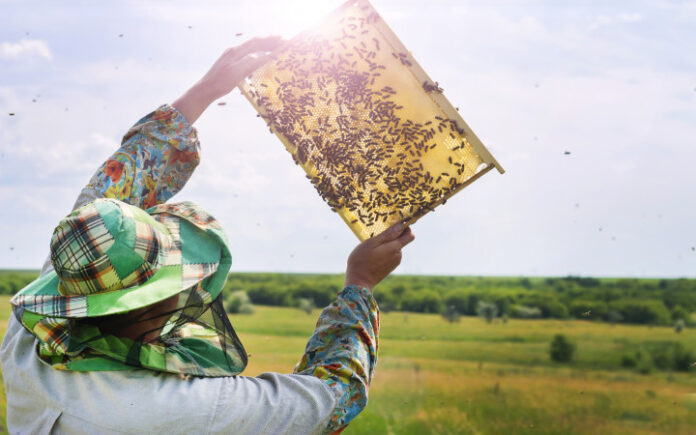 Humans spend a lot of time studying other animals. As they do so, many scientists realize people have a lot in common with the rest of the animal kingdom. For example, many animals form ordered societies, much like humans do. A pack of wolves follows an alpha. Some baboons inherit social status from their parents. Even chickens follow a pecking order!

One of the most interesting examples is the beehive. In these societies, all bees fall into one of three groups: worker bees, drones, and queen bees. Worker bees are always female. They collect pollen, feed other bees, and protect the hive. Drone bees are always male, and their only job is to mate with the queen.

A beehive contains anywhere from 10,000 to 80,000 bees—and only one of them is a queen. A queen bee’s job is very important. She lays eggs to ensure the hive’s future. She is the most important bee in the hive. Worker and drone bees live for a few months at most. Without a queen, the hive’s population would dwindle quickly.

A time comes in every queen bee’s life when she must give up her throne. Whether she’s injured, rejected by the hive, or just reaching the end of her life, the queen slows her laying of eggs. At that point, the rest of the hive knows it’s time to choose a new queen.

How do bees choose their next queen? First, the queen lays more eggs. Then, the worker bees choose up to twenty of the fertilized eggs, seemingly at random, to be potential new queens. When these eggs hatch, the workers feed the larvae a special food called royal jelly. This helps larvae to grow larger than the drone and worker bee larvae.

Then, worker bees place the potential future queens in separate cells in the hive. Inside their cells, the larvae continue feeding on royal jelly and growing. The first larvae to mature will become the new queen.

When the new queen emerges from her cell, her first job is to get rid of her competitors. She calls to the other still-growing larvae, who answer her. One by one, the new queen destroys these larvae in their cells. Sometimes, two queens emerge at the same time. In these cases, they fight. The winner becomes the new queen.

What about the old queen? Once a new queen has been chosen, a few things might happen. Sometimes, worker bees will kick the old queen out of the hive. In other cases, they allow the old queen to stay until she dies naturally. If a hive has grown very large, the old queen may lead a swarm of bees elsewhere to establish a new hive.

Aren’t bees amazing? We have them to thank for flowers, food, and honey. And on top of that, they maintain the strictly ordered societies of their hives. With all that work to do, there’s no WONDER where the term “busy bee” came from.