There Are 93 Airports in Colorado!

The first of our Colorado facts tells us about travel in the state. There are, in total, 93 airports there. Of these, 79 are public airports and 14 are commercial. Denver airport is considered to be one of the major travel hubs in the USA, while the airport at Colorado Springs offers travellers a non-stop service to major cities right across the nation. There are three other main resort airports: Aspen, Vail and Telluride. All of these give vacationers non-stop flights to and from all the major cities during the high spots of the ski-season.

Central City Is Home to the Gregory Lode Goldmine

On May 6 1859, John H Gregory made a discovery which came to be known as The Gregory Lode. This was found in a tiny stream flowing from Central City down to Black Hawk. It turned out to be a rich vein – with gold being produced there for well over a century. Within a few months of Gregory’s discovery, 10,000 people had descended on the city to find their fortune. During this time, the area became known as The Richest Square Mile on Earth.

The next of our Colorado facts surrounds the impressive feat of engineering which took place when a tunnel was built between Clear Creek and Summit counties. It was completed in 1979 and stands at 11,578 feet above sea level. It is 8,690 feet in length and it is estimated that, on average, as many as 26,000 vehicles pass through it every single day. The westbound carriageway of the tunnel is named after former US President Dwight D Eisenhower, whilst the eastbound carriageway is named for Edwin C Johnson, a former US senator who lobbied for Colorado to have its own interstate highway built.

Fountain, Colorado Was Chosen as the United States’ Millennium City

It was chosen for this accolade because it is believed to best demonstrate how the United States are ‘composed’ in terms of race, religion and overall standard of living. Sociologists and researchers from Queen’s College looked through the census records for the entire country and found that this was the place in the whole of the USA that best represented the nation as a whole.

Colorado Is Home to the World’s Tallest Sand Dune

The next of our Colorado facts relates to the state’s geography. The town of Alamosa in Colorado is the setting for The Great Sand Dunes National Monument, which is home to the world’s tallest sand dune. In total, the monument is 46,000 feet in length and some of the sand dunes there measure 700 feet high! The dunes are believed to have been formed over a million years ago by strong ocean waters and winds.

Beulah red is the name of a very distinctive form of marble that was used to construct the Capitol building in Colorado. The building was erected in the early 1890s and opened in 1894. However, the interior wasn’t complete until 1900 and it was made completely from this rare material dug from one source in Beulah, Colorado. The building used the entire supply from the quarry and there has never been another source found since. This means that should the interior ever need repairs or replacements, it simply cannot be done – unless another source is found!

Another of our historical Colorado facts relates to an area of national interest in Teller County. It’s called the Florissant Fossil Bed National Monument and is an internationally renowned former lake environment. Here, you will find an array of exceptionally well-preserved insect and plant fossils dating back to the Eocene area, which makes them at least 34 million years old. The main reason the fossils have been so well preserved is because there has been much interaction over the years with volcanic ash from a nearby volcanic field called the Thirty-nine Mile. The ash mixed with diatoms in the water and any plant or insect matter that died in there was preserved and perfectly fossilised.

One of our interesting geographical Colorado facts regards a record breaking suspension bridge in the state, the Royal Gorge Bridge. This monumental feat of engineering is over the Royal Gorge in Canon City. It spans the Arkansas River and stands at a height of 1,053 feet

Leadville City Is the Highest City in the Whole of America

Leadville City has the honour of being the city with the highest elevation in the United States. It stands at an incredible 10,043 feet above sea level. Leadville sounds like quite a dull name for a town of such high standing. It was named so, however, because the Founding Fathers felt that there were already a lot of cities and towns in the USA with names relating to silver. Therefore, this lofty city was named after lead instead.

Colorado Is the Only State to Turn Down Hosting the Olympic Games!

The next of our fascinating Colorado facts surrounds one of the world’s most popular events – the Olympic Games. Back in 1976, Denver was set to host the Winter Olympics. A vote was organised to decide whether the event should be held there, and 62% of people chose to opt out of hosting the games. They felt that it would be too costly, cause too much pollution and that there would be too many tourists. The games for that year were held in Innsbruck in Austria instead – the second time that town had hosted them.

On September 10 1945 a farmer called Lloyd Olsen, who lived in Fruita, was about to slaughter a five and a half month old cockerel called Mike, for the family dinner. However, he did not do the best job – the axe Farmer Olsen used missed the jugular vein and left the brain stem of the bird intact. Mike was, allegedly, left alive and was able to balance clumsily on a perch and even eat. The family decided to care for the bird as best they could and looked after him by feeding him milk and water from a pipette and offering small grains of corn. The family toured in sideshows with the bird as a spectacle and made a fortune from his misfortune. Mike carried on like this for a further two years until he choked to death one night in a motel in Phoenix, Arizona.

Mmm! Denver Is Home to the Cheeseburger

The cheeseburger – a hamburger topped with a slice of cheese – was formally invented in Denver, Colorado, way back in 1935. There are claims that it was invented much earlier, in the 1920s in Pasadena, California, and that other variations of the dish included the addition of spaghetti sauce on top of the cheese, but the original patent and trademark for the meal belongs to a man called Louis Ballast of the Humpty-Dumpty Drive-In, in Denver. It was the owner of the restaurant, Gus Belt, who applied for the patent. He was successful and, therefore, officially, this world-wide popular snack originates here!

Constructed prior to 1881 and still in constant use – though now it is mainly a tourist attraction – the Durango and Silverton Narrow Gauge Railroad is one of only a few places in the entire United States that still uses steam locomotives. Originally constructed to transport silver and gold mine ore from the San Juan mountain range, the last official train to carry out this task ran on the line in 1968. After this time, the line was bought as a joint purchase between New Mexico and Colorado and now operates as the Cumbrec and Toltect Scenic Railroad. The Durango Silverton depot is still preserved in its original form and some of its original rolling stock is still in operation.

The penultimate of our Colorado facts tells us about John Henry “Doc” Holliday, an infamous gunfighter and gambler who was also a good friend of Wyatt Earp. Originally, Holliday, who hailed from Georgia, trained as a dentist. At the age of 20 he contracted tuberculosis and moved out to the south west of the country in the hope it would ease his symptoms. He left dentistry behind and became a gambler and earned a reputation as a fearsome gunman. In 1880 he befriended Wyatt Earp after saving his life and became Deputy US Marshall during the Gunfight at the OK Corral. After the shootout, a warrant was issued for the arrest of Holliday and Earp, but they rode away, first to New Mexico, then Colorado. Earp learned that Holliday was due to be extradited, and arranged with Colorado’s governor for this to be stopped. Holliday died, aged 36, in Greenwood, of tuberculosis. It is believed that he killed seven men and took part in nine deadly shootouts during his life.

Colorado Accounts for 75% of the Land Area of the USA

The final of our interesting Colorado facts is an astonishing one and concerns the state’s land mass. Colorado does indeed account for 75% of the entire land area of the United States, which it achieves due to its many mountains. The state’s average altitude is just over 10,000 feet. 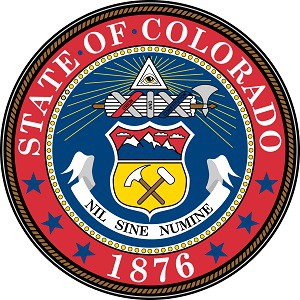 Facts about Colorado tell us that the state has a high number of airports, and that it is home to the world famous cheeseburger. Fountain is the official millennium city of the United States and Denver was the only place to ever turn down hosting the Olympic Games!