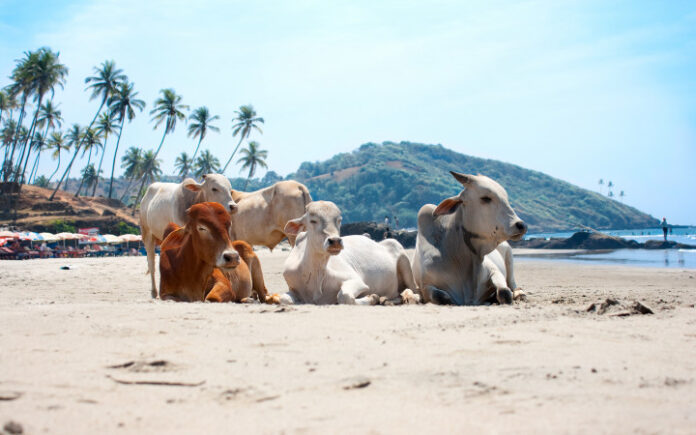 Can you do a backstroke? How about a butterfly? Are you the master of the doggy paddle? Maybe you don’t spend much time swimming at all. Some humans are very good swimmers. Others have to work hard just to float on their backs.

The same can be said for much of the animal kingdom. Fish are great swimmers, of course. But plenty of other animals are, too! Ducks, geese, turtles, and otters are just a few creatures that do well in the water. Others include crocodiles, polar bears, and even cows.

That’s right, cows are strong swimmers! Don’t believe us? Just ask anyone who works with cattle. They’ll tell you that many cows swim just as well—if not better—than people do.

In some cases, cows swim across bodies of water as part of normal farming practices. For example, a herd of cattle in Ireland swim across a large lake each year to graze. Ranchers lead the cows on the nearly 330 foot-long (100 meters) swim every summer.

In 2019, three cows made the news when they crossed nearly five miles of the Atlantic Ocean. When Hurricane Dorian hit Cedar Island in September 2019, it swept up the cows in a sudden deluge. Later, they were found happily grazing on the Outer Banks of North Carolina. Officials say the cows must have swum the distance between the two islands during the storm.

Cows aren’t the only surprising swimmers in the animal kingdom. Would you believe that cats, sheep, and pigs are also strong swimmers? It’s true! Despite their dislike of water, cats can swim when necessary. And pigs enjoy it so much that they can be found swimming in the waters of their very own coastline in the Bahamas—a place called Pig Beach!

Even some very large mammals are good swimmers. One example is elephants. Some experts even believe the elephant’s trunk evolved as a natural snorkel. They’ve been observed swimming nearly 30 miles (50 kilometers) at one time.

Other mammals would much rather remain on dry land. Most experts don’t believe giraffes can swim, although there’s not much evidence either way. And mankind’s closest relatives—chimpanzees—won’t be winning Olympic gold anytime soon, either.

From their four stomachs to their part in dairy production to their swimming abilities, cows are fascinating animals. What other amazing talents might they be hiding? Take a few minutes to do some research of your own. You never know what you might find!