Liberty Enlightening the World. That’s the meaning of the Statue of Liberty on Liberty Island off the coast of New York City. But this iconic statue of a green woman outstretching a torch while clasping a tablet to her chest holds much more history and significance than you may think. The story of building the Statue of Liberty is a story of history, celebration and hope.

Much like the Miami Freedom Tower in Miami, the Statue of Liberty has been an iconic symbol for new immigrants to the USA for over a century. But did you know that the Statue actually started as an acknowledgment of the friendship between France and the United States? And that the idea of the statue actually came from the 100 year anniversary of the Declaration of Independence? Read on to learn more about the history and building of the Statue of Liberty.

The Meaning Behind Lady Liberty

In the most basic sense of the term, “liberty” refers to the freedom of doing, living and being as you choose. The concept of liberty has been personified since the days of Ancient Rome. Libertas was the Roman Goddess of liberty and was a highly used figure during the second Punic war from 218 – 210 BC. The Goddess was especially important during this period of Roman history because liberty or freedom wasn’t seen as a human right. Instead, freedom was granted under Roman law for certain citizens.

Since then, “Lady Liberty” has been seen from sea to sea. From the famous 1830 painting Liberty Leading the People to Poems, statues and coins, a woman representing freedom is almost as old as the concept of liberty itself.

It’s not that surprising, then, that the Statue of Liberty depicted this iconic image as well.

The Friendship between the French and the United States

The idea of a statue for New York actually came from the French. French historian Edouard De Laboulaye proposed creating a gift to the US to celebrate the centennial anniversary of the Declaration of Independence. Laboulaye was a major supporter of Abraham Lincoln and fully believed in the “common law of free peoples”. He proposed the monument in 1865 just as the Civil War came to an end – a war fought to strengthen democracy, end slavery and spread the idea of liberty across the country.

Laboulaye paired with Frederic Auguste Bartholdi who was a French sculptor. Together, along with Alexandre-Gustave Eiffel, the Statue of Liberty was created.

Designing the Statue of Liberty

In 1855, Bartholdi had visited Egypt and was enamored by the country. He decided he would create a monument to sit at the Suez Canal in Egypt. The colossal woman would wear traditional clothing for an Egyptian worker woman and was supposed to represent the development and Europeanization of Egypt. When the deal fell through, he put his design on hold.

When Bartholdi was approached by Laboulaye to build a monument for America, he used the same concept and design to create the Statue of Liberty. Instead of the garments of a traditional Egyptian woman, the flowing clothes were transformed into the robes of liberty.

Building the Statue of Liberty

It took a total of 9 years to complete the Statue of Liberty. The statue was built completely in France before it was disassembled, shipped to the US and rebuilt on American soil.

Frederic-Auguste Bartholdi used his sculpting skills to hammer and mold copper into the shape of Lady Liberty. The copper, however, would never withstand the strong winds in the bay of New York City. This is where Alexandre-Gustave Eiffel came into play. The same Eiffel who designed the Eiffel Tower in Paris, he used steel beams to create the frame that Bartholdi’s copper sheets would be attached to. This would help keep the structure in place and in the proper shape for decades to come.

The seven points on the Statue of Liberty’s crown are believed to represent the seven seas and seven continents of the world. Others do say, however, that the spokes are supposed to be rays that represent the divinity of Liberty and her everlasting presence on earth.

The tablet is engraved with the Roman numerals of the date the Declaration of Independence was signed – July 4, 1776. In the numerals, it looks like this: 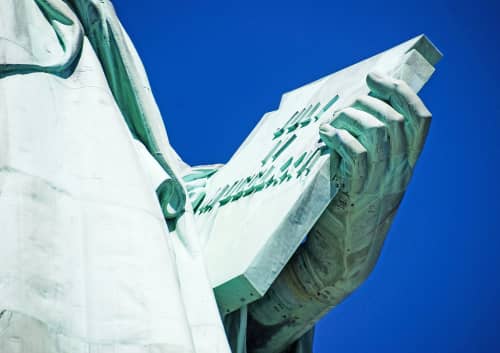 In 1885, the Statue of Liberty Enlightening the World was complete. She stood 111 feet and 6 inches tall and weighed about 225 tons. That’s about the weight of 14 and a half D6 dozers. The equivalent cost to build the statue in France was around $250,000 USD – about $5.4 million dollars today.

What’s funny about that is that in scrap metal, some say that the copper used to make the statue is only worth about $200,000 dollars.

Then it was time to get her to the USA.

Shipping the Statue of Liberty from France

The entire statue was shipped by boat from France to New York. Lady Liberty was broken down into 350 pieces and packed up into 214 wooden crates. She was shipped in the French Warship Isere. It took a grand total of four months from shore to shore to transport her.

While all this designing and building in France was happening, there was a lot of work going on in the US to prepare for the project.

Building the Pedestal To Support the Statue

As the actual statue was being built in France, people in New York were working to get the space ready to build the monument on.

Fundraising efforts, including contests, benefits and exhibitions were held in the US to raise money for the construction of the pedestal that Liberty would be placed upon. It fell to American Architect Richard Morris Hunt to find a place to build the pedestal and begin designing it

You may now know the island on which Liberty stands as “Liberty Island”. In fact, this name was only given to the island in 1956. Before this, the island was called Bedloe’s Island and held nothing more than old stone and long-forgotten memories.

Fort Wood was an army base that was built on Bedloe’s Island during the war of 1812. It was used as a harbor defense system to help protect New York City from the British. The fort was made of stone walls in a star-like pattern – long of which has begun flailing apart and seemed useless.

In the eyes of an architect, however, this symbol seemed like the perfect place to start building a home worth of Lady Liberty.

Originally, Hunt wanted to model the pedestal after the Lighthouse of Alexandria – one of the 7 Wonders of the World. But a lighthouse is different from a statue of a woman and the pedestal needed to reflect the actual structure and not what Hunt wished or hoped for.

He was inspired to create a pedestal that would not steal the show itself but highlight the beauty and wonder of Liberty. In the end he designed a pedestal that reached 114 feet high and an even higher budget. Costs demanded that Hunt reduce the size of the pedestal. He settled on an 87-foot tall structure with a granite facade to hide the concrete and steel that supports the colossal woman. 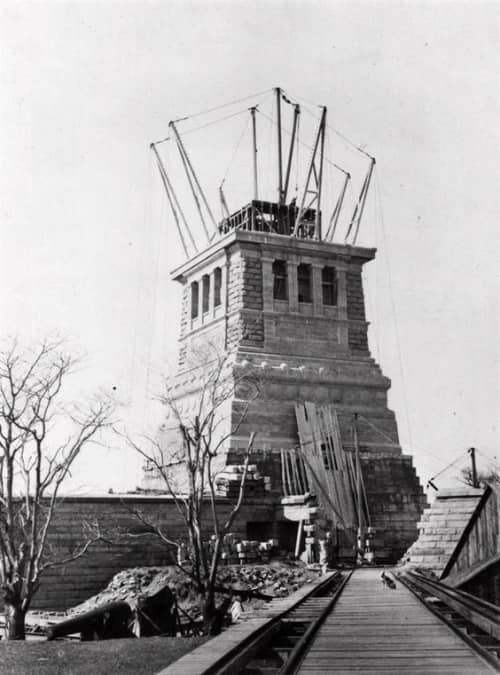 It took three years to complete the pedestal itself. Construction took place from October, 1883 to April, 1886. The foundation took 10 months to build before construction of the actual pedestal itself began. The story goes that in 1884 the project ran out of money. As anyone in construction can attest to, money can make or break a project.

For the pedestal, Public interest had died. It took Joseph Pulitzer, publisher of The New York World and namesake of the Pulitzer Prize, taking an interest and writing about it in his paper to kickstart another round of interest and support. Construction picked up again and they were able to finish it in time for the arrival of the Liberty into New York City.

After the pedestal was complete and the 214 wooden crates arrived, it took four months for crews to rebuild the statue. In total, the height of the statue and pedestal reached just over 305 feet – or 93 meters.

On October 28, 1886, President Grover Cleveland officially opened and dedicated the statue in front of thousands of New Yorkers and spectators. 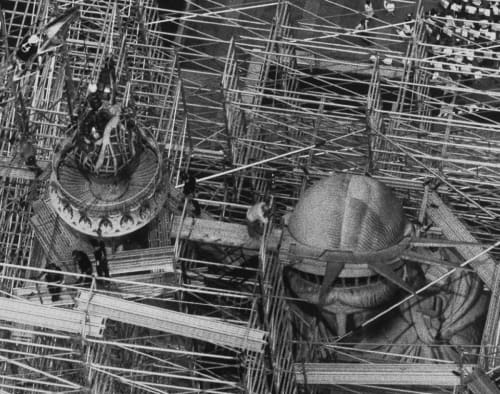 A Symbol of Freedom for Immigrants

In 1892, a federal immigration station was opened on Ellis Island, right near the Statue of Liberty. Between opening day and closing in 1954, they say that over 12 million immigrants were processed through that station. During 1900 – 1914 – the peak years of the Ellis Island Immigration Station – between 5,000 and 10,000 people were processed every single day.

Because the boats that passed through to Ellis Island would go past the statue, Liberty became a symbol of arriving in the United States, the start of a new life and the hope of personal freedom and liberty to live as they chose to.

There’s a sonnet from the poem “The New Colossus” engraved on the pedestal that embodies the image of a new life that many immigrants saw in the Statue of Liberty. The poem was written by Emma Lazarus as a fundraising effort to fund the statue which makes these words even more meaningful:

“Live me your tired, your poor/Your huddled masses yearning to breathe free/The wretched refuse of your teeming shore/Send these, the homeless, tempest-tost to me/I lift my lamp beside the golden door!” 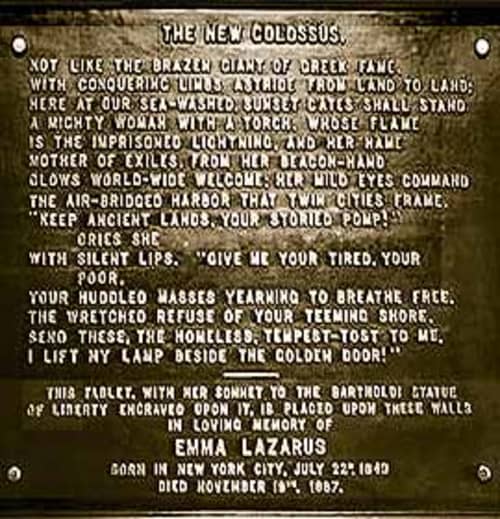 How the Statue of Liberty Has Been Used

The US Lighthouse Board used the statue as a navigational aid for sailors up until 1901. Fort Wood was still an operational army post so the U.S. War Department took over control of the statue and island. In 1924, the statue officially became a national monument and the National Parks Service of the USA took over control in 1933.

Bedloe’s Island was officially renamed Liberty Island in 1956. In 1965, Ellis island – the old location of the immigration station – became an official part of the Statue of Liberty National Monument.

The iconic green colour of the Statue of Liberty is not the original colour. As was explained, the statue is made of copper. Copper is usually a shiny bronze colour. It’s the oxidation over time that has turned her green. It’s said that the statue was already totally green by the 1920s. 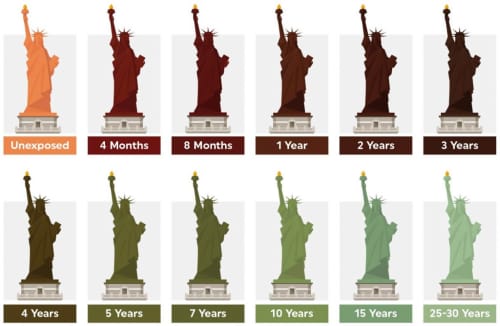 A restoration of the statue took place between 1984 and 1986 as a celebration of Liberty’s 100th birthday and the United Nations named the Statue of Liberty a World Heritage Site. Construction repaired the statue from the inside out, including her crown and addressing water damage that had affected her torch flame.  It was during the restorations that the torch itself was replaced with an exact replica. The original torch can be seen still in the museums that live within the pedestal under the statue.

Today, the green colour of the Statue of Liberty is as much a part of the iconic structure as the statue itself. Today, Liberty is left to nature’s devices. It’s an added bonus that the natural oxidation provides protection for the structure against the wind, snow, hail and rain that can come down in New York. Cleaning it off could actually do more harm than good.

The Statue of Liberty Today

Today, the Statue of Liberty earns just over $263 million USD annually and can see upwards of 3.5 – 4 million visitors each year. You would have to climb 354 steps to the top of the crown, where you could use one of the 25 windows to take in the view of the bay.

The statue itself has become an icon to represent not only New York City, but the United States as a whole. It’s easy to look at this woman with her torch outstretched, enlightening the world with hope for freedom and peace and feel a deep sense of peace and inspiration.

Once again, that Statue of Liberty is proof that construction does more than simply build buildings. Construction allows us to create lasting icons that represent our hope, our dreams and our search for Liberty.

via dozr.com
Posted in Facts & History