The Dangers of Trees That Are Close to the

A Short History of Showering

Personal hygiene hasn’t always been an integral part of grooming, yet the need to clean oneself easily and quickly was as pressing in ancient times as it is today. Bathing in a tub was cumbersome, so those who could bathed under waterfalls. These were the first showers used by man.

The first man-made showers that provided the privilege of bathing in the privacy of one’s homes dates back to the time of ancient Egypt and Mesopotamia. These were generally enjoyed by the wealthy because it involved having someone—a slave in most cases—pouring jugs of water from above. There are wall paintings in temples and buildings showing how servants bathed ancient Egyptian queens and members of the royal family. Excavations of wealthy homes in Thebes, El Lahun, and Amarna found stone-lined chambers equipped with sloped floors that allowed bath water to drain. 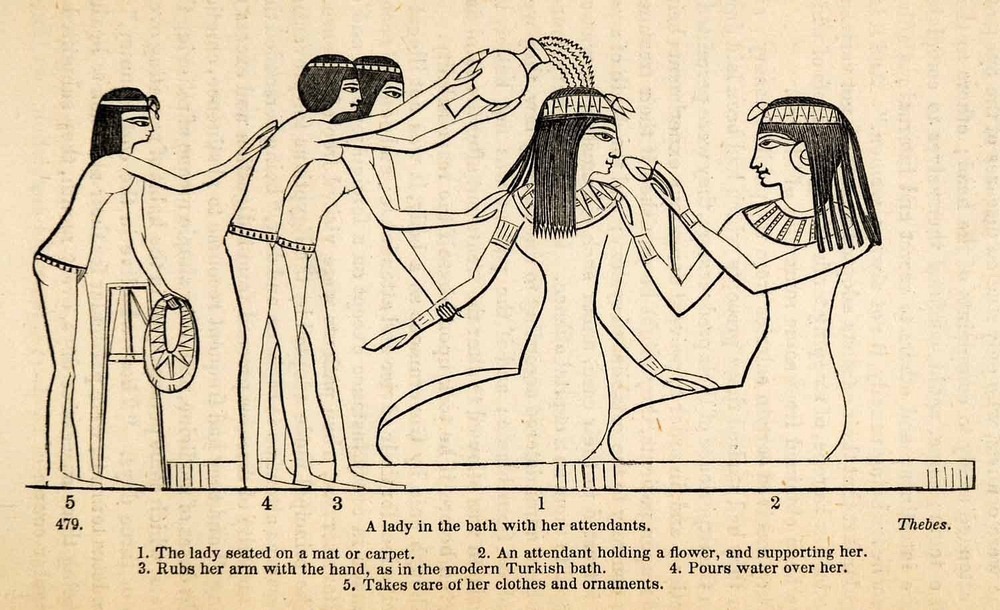 A 19th century woodcut reproduction depicting an ancient Egyptian woman bathing with the assistance of her female attendants in Thebes, Egypt.

The ancient Greeks had indoor showers at gymnasiums which they installed through advances in aqueducts and plumbing. Jets of cold water cascaded from the ceiling while bathers stood under it. The ancient Romans, like the Greeks, too had showers in their bathhouses that can still be found all around the Mediterranean and in modern-day England.

After the fall of the Roman Empire and the rise of Christianity, public bathing fell out of favor, especially the mixing of the sexes because bathing naked in front of the opposite sex enticed lust, which according to Christianity was sin. While public baths fell out of use in Mediaeval times, contrary to popular belief, sanitation did not. Indeed, the crusaders brought soap back from the far East to Europe, and soapmaking first became an established trade during the so-called “Dark Ages”. What was lost was the sophisticated water and sewage systems developed by the Greeks and the Romans. People went back to bathing in wooden tubs. 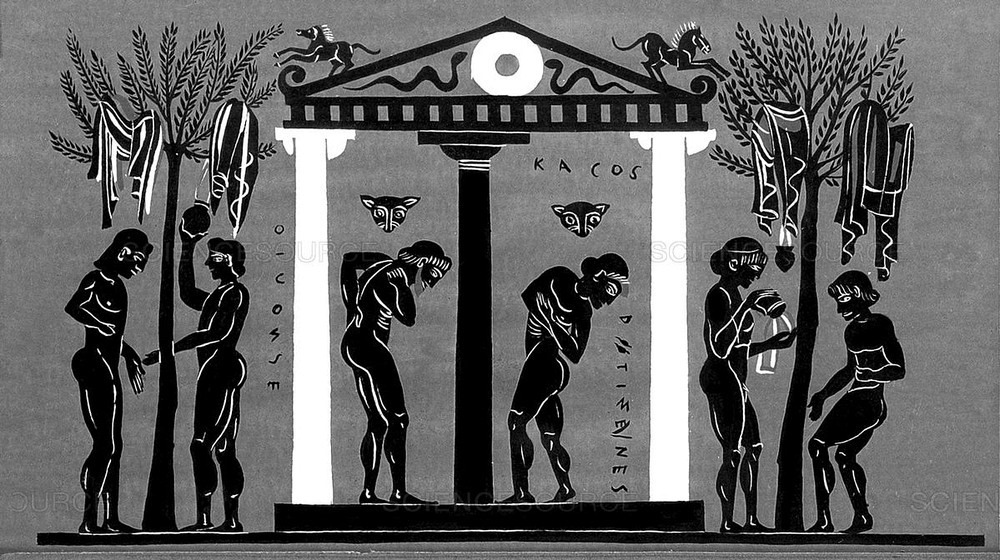 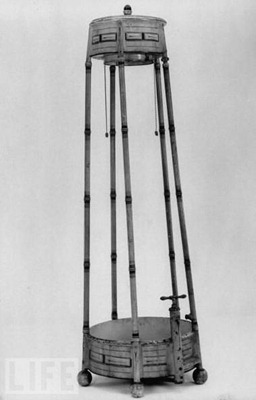 By the 18th century, interest in personal hygiene began to grow once again sparked by advances in medicine and epidemiology. But bathing was a slow process. Bathtubs were large and needed a lot of water to fill, which had to be heated and carried to the bathroom from the kitchen in buckets. It involved a lot of labor.

An English stove and heater manufacturer named William Feetham decided to speed things up. He created and patented the world’s first mechanical shower. His contraption consisted of a basin, where the bather stood, and an overhanging water tank. The bather used a hand pump to pump water from the basin to the tank, and then pulled a chain to dump all the water at the same time over his head. The process was then repeated.

Feetham’s invention failed to generate interest among the aristocrats because the water would be dirtier and colder each time the chain was pulled. Getting deluged with a shock of cold water was too much for the rich, who were used to bathing in hot water in large bathroom and spacious tubs. Nevertheless, Feetham’s shower was the best people had for more than a century. 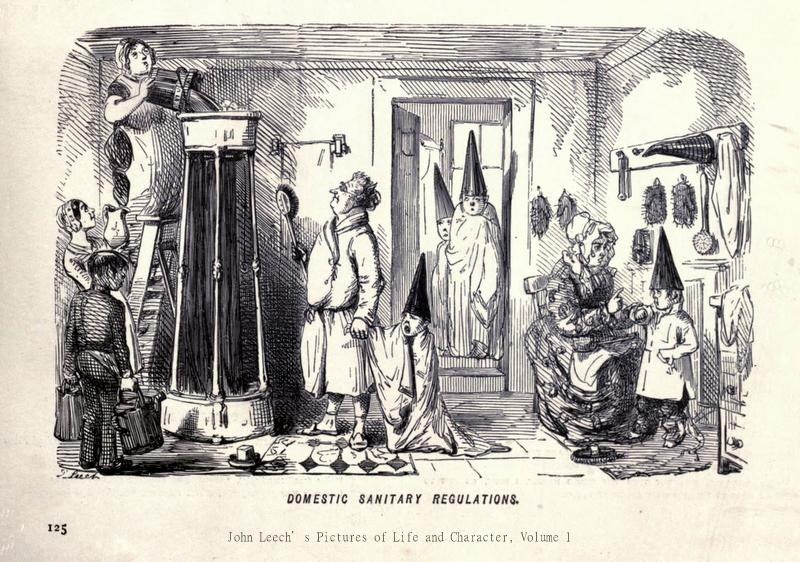 A maid filling a Feetham-like mechanical bath for her master. An actual Feetham bath has a hand-operated pump.

Showering was popularized in the mid-19th century by a French doctor Merry Delabost. As surgeon-general at Bonne Nouvelle prison in Rouen, Delabost replaced individual baths with mandatory communal showers for use by prisoners, arguing that they were more economical and hygienic. He also guided the installation of showers in the barracks of the French army in the 1870s. Meanwhile, development in water heater meant that people no longer had to shower in the cold. Indoor plumbing had improved by then allowing free-standing showers to be connected to running water source. Even middle class homes began to have hot running water.

In 1868, an English painter named Benjamin Waddy Maughan invented a water heater that, for the first time, did not use solid fuel. Instead, water was heated using hot gases generated by a burner. Unfortunately, Maughan forgot to add a ventilation causing the burner to sometimes explode. Although Maughan’s invention failed, the name he coined stuck. It was Maughan who coined the term “geyser” which is still used in the UK and in many Asian countries.

Maughan’s design was improved by a Norwegian mechanical engineer named Edwin Ruud, and in 1889, the first safe, automatic, gas-powered water heater was invented and a new era of warm showers began. 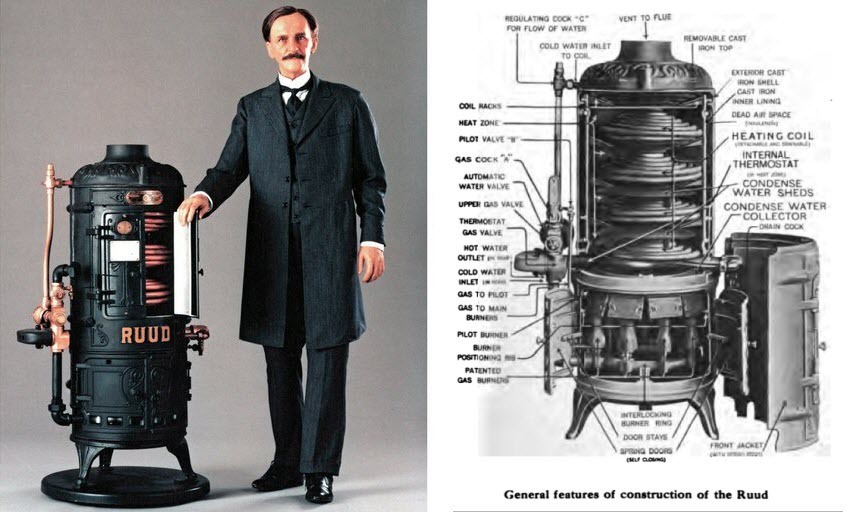 Edwin Ruud standing besides the water heater he invented. On the right is a diagram showing the innards of a Ruud instantaneous water heater.