Skip to content
Little heralds the arrival of summer like the smell of open water, smokey grills and sunscreen.

Since the late 1970s, as medical researchers linked sun exposure to skin cancer, Americans have been told to dutifully slather, spray and rub on sunscreen as part of a broader package of sun protection. But does it make sense for me, a dark-skinned black woman, to wear it?

With record-breaking heat this summer, it’s an especially relevant question, and you might even expect the answer to be “absolutely.” It’s more complicated than that.

The American Academy of Dermatology’s official position on sunscreen, which is echoed by the Food and Drug Administration, is that everyone, regardless of skin tone, should wear it because, “anyone can get skin cancer, regardless of age, gender or race.” But because people of color are often left out of clinical trials and treatments, there is very little research available about dark-skinned people and skin cancer, which raises questions about who is being considered when organizations make these public health recommendations.

Medicine, they say, is about balancing risks, and it turns out that the benefits and risks of wearing sunscreen when you have dark skin can be murky. Many experts believe that there is no clear link between sun exposure and skin cancer among people with dark skin, and there is also a growing body of research to suggest that using certain types of sunscreen may actually be harmful, no matter who uses it.

Now, let’s get some — ahem — burning questions out of the way. Black people experience sunburn that can be painful and cause peeling. When their skin is exposed to too much sunlight, black people can suffer from hyperpigmentation and visible signs of aging, just like people with other skin types. And, of course, black skin comes in a variety of shades, some of which are more sensitive to the sun than others. 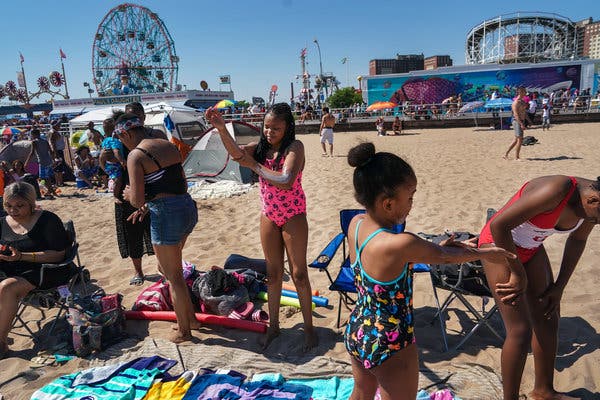 People whose skin is naturally brown when it has not been exposed to sunlight “are quite resistant to skin cancer,” Dr. Weinstock said.

When dark-skinned people do get skin cancer, as Bob Marley famously did on his big toe, it tends to appear on “the palms of the hand and the sole of the feet,” said Dr. Adewole Adamson, a dermatologist and the director of the pigmented lesion clinic at The University of Texas at Austin’s Dell School of Medicine.

According to Dr. Adamson, the fact that dark-skinned people are most likely to get skin cancer on the areas of the body that are least likely to be exposed to sunlight suggests that this cancer is unrelated to sun exposure.

“If UV exposure was such a problem for skin cancer, you’d see a massive epidemic in sub-Saharan Africa,” he added. “They don’t have the same level of sunscreen promotion that they do here. And you hear nothing about it because there probably is no association.”

Melanin is humankind’s inborn sunscreen. Everyone has melanin, but much like swagger, some of us have more of it. Melanin is also believed to delay the visible signs of aging. It’s why “black don’t crack.”

Dark-skinned people don’t have more melanocytes, the cells that produce melanin, than lighter-skinned people. But the melanocytes that we do have tend to be more productive. And it’s because of melanin that some scientists believe darker skin tones absorb between 50 to 70 percent less of the sun’s ultraviolet light than paler skin tones. Exactly how much less is not well understood because fewer studies look at how darker skin reacts to the sun.

This is not to say that dark-skinned people shouldn’t pay attention to their moles and get periodic skin checks — they should. Among dark-skinned people, skin cancer actually tends to be deadlier in part because it often goes undiagnosed for longer. It’s just that, according to these experts, the cause of that cancer isn’t necessarily the sun. 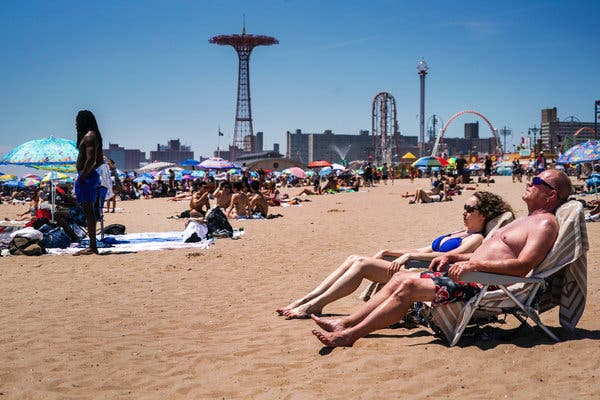 There are two broad categories of sunscreen. The first is mineral, which contains titanium dioxide or zinc. This type of sunscreen is considered safe by the F.D.A., as long it is not in powder form. It is also the type that black people tend to avoid because it often leaves a white residue on dark skin.

The second category is chemical. There is no consensus among scientists that the active ingredients in many chemical sunscreens, including oxybenzone, are safe. In fact, there’s new evidence to suggest that they may carry their own health risks.

A pilot study that the F.D.A. released earlier this year in the Journal of American Medical Academy caused a stir because it found that when participants applied a day’s worth of common sunscreens, they not only absorbed its chemicals but did so at levels that exceeded a target F.D.A. toxicology threshold.

That these chemicals are absorbed into the skin at such high concentrations doesn’t mean they’re inherently dangerous, but it does mean that they need to be studied for biological effects.

“Although over-the-counter sunscreen products are widely used, little is known about systemic exposure for most active ingredients,” the F.D.A. said in a written statement.

Kurunthachalam Kannan, the deputy director of the Division of Environmental Health Sciences in New York State’s Department of Health, Wadsworth Center, was the lead author on a study that looked at the correlation between chemical sunscreen use and endometriosis, a condition that affects the uterus.

Dr. Kannan’s study found that women who used more sunscreen that contained benzophenone or oxybenzone, two estrogenic compounds, had higher levels of the chemicals in their urine, and had higher rates of endometriosis. Dr. Kannan said he considers chemical sunscreen use something of a double-edged sword. It potentially provides protection from skin cancer, but it can also affect estrogen levels, which could lead to a variety of diseases.

These findings are part of why Dr. Adamson thinks there needs to be more discussion around the particular risks and benefits of wearing sunscreen, especially for people with dark skin.

“As I was looking at all this stuff, I’m like, there’s nothing on people of color in here and yet I see this messaging saying, ‘Hey, wear your sunscreen,’” Dr. Adamson said.

In a statement, the American Academy of Dermatology said that “while there is strong evidence to show all skin types benefit from sun protection to reduce sunburn and aging, research is emerging that explores the relationship between sun exposure and skin cancer in people of color.”

The organization has appointed a working group to review current science in the area, and to “assess our messaging on skin cancer and skin of color based on the latest research.”

In an article published earlier this year, Dr. Adamson stressed that the “one-size-fits-all approach” to sunscreen misses the mark and must change.

Telling everyone to wear sunscreen is “one of the only public health messages that we have as dermatologists,” Dr. Adamson said. “We’re not messaging right for black people.”